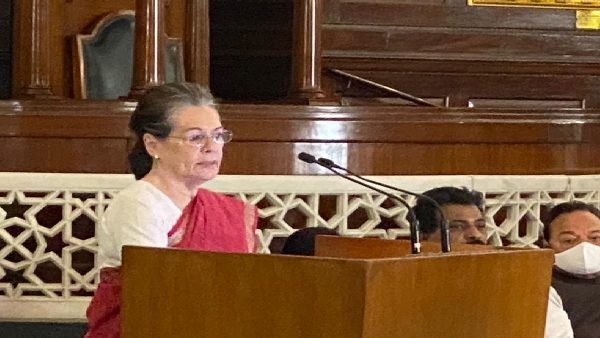 Congress President Sonia Gandhi held the party’s parliamentary party meeting on Tuesday. All Congress MPs from Rajya Sabha and Lok Sabha attended the meeting. During the meeting, Sonia Gandhi emphasized the need for change in the party. Along with this, he also fiercely attacked the Modi government on other issues including inflation. Sonia Gandhi said that our (Congress) emerging strong once again is important not only for us but also for democracy and society.

In the meeting with the party MPs, Sonia Gandhi also gave a strong message to the party factions. He said that whatever the issue may be, unity in the party is at the top. Sonia Gandhi fiercely criticized the NDA government in the Parliamentary Party meeting. He said that she is trying to spread fear and intimidation as much as possible. He said that the government should also worry about how to secure the career of the students who have been brought from Ukraine to India.

The defeat of five states became painful for the Congress

Sonia Gandhi said that there is a need to take a lesson from the party’s defeat in the recently held elections in five states. He said- I know how sad all of you are due to the defeat in the recent elections. The results were shocking and sad. Sonia Gandhi said that the agenda of dividing the country and polarization of the Modi government continues.

Unity is paramount in the party – Sonia Gandhi

Sonia also talked about reviving the Congress. He said that change is necessary in the Congress, but more than that ‘unity in the party is paramount’. Sonia Gandhi said, ‘I am ready to take every step to ensure this.’

Sonia Gandhi told the MPs, ‘The road ahead of us is very challenging as it never was. Our dedication, determination and spirit to resurface is to be tested. He said that change in Congress is necessary not only for the party but also for the democracy and society of the country.

Let us inform that this statement of Sonia Gandhi has come before the Chintan Shivir to be organized by the party. In this camp, brainstorming will be done about the party’s crushing defeat in 5 states including UP, Punjab.

Sonia Gandhi gave this message to the factionalists

Sonia Gandhi said that factionalism will not be tolerated in the party at any cost. These factors have affected the performance of the party in the elections. Whatever be the issue, solidarity is very important, he said. During this, Sonia Gandhi also gave a strong message to the G-23 group. She said that if the suggestions of the G-23 leaders have some merit, she will accept them.