Political News: Varun Gandhi and Maneka Gandhi out of the BJP National Executive, will they leave the BJP and return home? 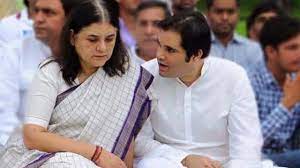 Before the assembly elections to be held in 5 states next year, BJP has announced its national executive. 80 people including Prime Minister Narendra Modi, senior BJP leaders LK Advani and Murli Manohar Joshi have been included in the national executive. But MP Varun Gandhi and his mother Maneka Gandhi have been shown the way out. It is believed that along with Varun Gandhi, Maneka Gandhi has also been blamed for repeatedly making statements against the party line and questioning her own government.

Who is there in the executive body of BJP?

The BJP, which claims to be the largest party in the world, has announced its national team ahead of the assembly elections to be held in 5 states next year. According to the release issued by BJP General Secretary Arun Singh, 50 special invitees and 179 permanent invitees have also been included in the working committee. In which the Chief Minister, Deputy Chief Minister, Legislature Party Leader, Former Deputy Chief Minister, National Spokesperson, National Front President, State In-Charge, Co-in-Charge, State President and State General Secretary Organization have been given place. In fact, the BJP’s National Working Committee discusses various issues and sets the framework for the organization’s functioning. Let us tell you that due to the Covid epidemic, the meeting of the Working Committee has not been held for a long time.

Even though the National Executive issued by the Bharatiya Janata Party today is being patted on the back for expelling Varun Gandhi and his mother Maneka Gandhi, but the reality is that Maneka and Varun’s mind was filled with the politics of BJP. Is. Its symptoms were visible from the last Lok Sabha elections itself. The speculations being made about Varun and Maneka are not accidental. If you look at the tweets of Varun Gandhi of the last few days, you will feel that while Varun Gandhi is giving an opportunity to the opposition to attack by questioning his own party and leaders, the high command is also being angry with his behavior. If we look at Varun Gandhi’s track record, the leaders who have got a lot of attention in the Modi cabinet are seen far ahead. After calling Prime Minister Narendra Modi better than Indira Gandhi before the 2019 general elections, not only Varun Gandhi, but also his mother and Sultanpur BJP MP Maneka Gandhi must have felt that if the government is formed, the cabinet formation is not right. Or even in the event of a reshuffle, neither of them will be part of the cabinet. In July, 2021, when the Modi cabinet 2.0 was to be reshuffled, the name of Varun Gandhi also appeared in the list of probables and the first reason for this was understood that in order to control the attitude of UP Chief Minister Yogi Adityanath, BJP The leadership cannot be denied doing so. Varun Gandhi has had the image of a fire brand leader long before the Modi-Shah era came into existence

Punishment for questioning the government?

In fact, when the BJP declared the 80-member National Executive today, everyone’s eyes were on whether Varun Gandhi is given a place in it or not. But as soon as the executive committee was announced. Not only Varun Gandhi but his mother Maneka Gandhi was also not given a place in it. In fact, for some time now, Varun Gandhi has not only been questioning the policies and functioning of the Modi government at the Center, but has also been vocal against the Yogi government regarding the Lakhimpur Kheri incident. In the Lakhimpur Kheri incident, Varun Gandhi has been seen putting pressure on the Yogi government by tweeting every day. Even today, Pilibhit MP Varun Gandhi tweeted after the new video of Lakhimpur incident surfaced and surrounded his own government and wrote that, this video is as clear as a mirror. You cannot silence the protesters by killing them. Accountability has to be fixed for the incident of shedding the blood of innocent farmers. It is believed that the punishment for repeatedly making statements against the party line has been given by showing the way out of the national executive. Apart from Varun, Maneka Gandhi, BJP’s fire-brand leader Vinay Katiyar has also not been given place from the National Working Committee. Whereas leaders from other parties have been included in this. But it has to be seen how this executive copes with the upcoming challenges and how the displeasure of those who have been ousted from the working committee is seen ahead.