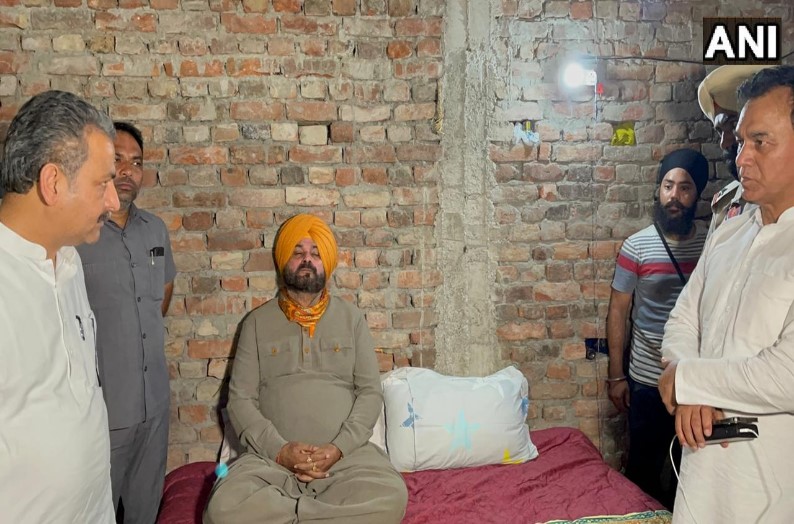 Lakhimpur Kheer. Punjab Congress leader Navjot Singh Sidhu, who reached Lakhimpur Kheri in Uttar Pradesh, has sat on a hunger strike demanding action against the son of Minister of State for Home Ajay Mishra. Sidhu announced hunger strike and fasting of silence after meeting the family members of journalist Raman Kashyap, who was killed in the violence during the farmers’ death.

Earlier, Sidhu, who reached Lakhimpur Kheri from Punjab, first reached the house of the young farmer Lavpreet Singh who was killed in the violence and from there reached the house of the deceased journalist Raman Kashyap, where he lay down in silence. Punjab government minister Bijender Singla, who was accompanying Sidhu, said Sidhu’s fast would not end until Ashish Mishra, son of the Minister of State for Home, appeared before the police.

Targeting Union Minister of State for Home Ajay Mishra over Lakhimpur Kheri violence, he said, “There is evidence, there is video, there is name in the FIR, I witness is saying that I saw, its full mention in the FIR. If so, then the arrest is not happening because he is the son of the minister.
Talking to reporters after condoling the family members of 20-year-old Lovepreet Singh on Friday, Sidhu said, “Enough has happened, today if you look at the farmers’ movement, the faith has been lost on this system. The faith of the farmer brothers has also been lost. I had demanded even then because the name is there in the FIR and there is an eyewitness, the son of the minister should face the investigation or else he should be arrested. The police can remove the hair if they want.”

This Punjab Congress leader raised the question “But why is it being ignored, it is not understood, moral strength is being lost, characters are getting lost, the question is of faith.” Referring to the human senses, he said, ‘I was coming, a calf came on the road, braked twice, got upset and it survived, but trampled on the car, where is the humanity, this Only a god can do it.” Sidhu said, “Inspired by Priyankaji and Rahulji, I have come here and what I have seen and heard is heartbreaking. There is a saga of a heinous crime, the whole of India is calling for justice today.

Terming the Lakhimpur incident as a blot on the BJP government’s forehead, he said, “My political life has turned 17 years old and for me nothing is bigger than the Constitution. There is an attempt to kill the spirit of the Constitution, Jamhooriyat, Justice. Justice cannot adopt double standards.” Responding to the government giving financial assistance to the families of the killed farmers, he said that “No one can put a price on human life with money, it cannot be compensated.”

It is to be known that last Sunday, eight people, including four farmers, were killed in the violence in Tikonia area of ​​Lakhimpur Kheri district. It is alleged that these farmers were hit by a vehicle. The name of Ashish, son of Union Minister of State for Home Ajay Mishra, has also been named in the FIR registered in this case. Ashish was asked to appear before the police on Friday but he has not appeared yet.