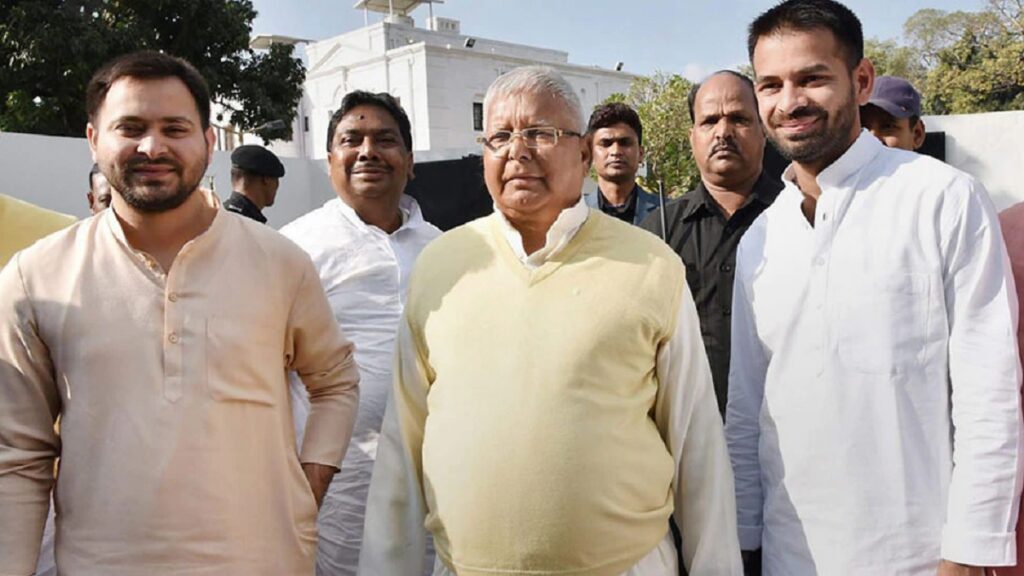 Lalu Prasad has been imprisoned in Delhi. Yes, we are not saying this, rather, this sensational allegation has been made by Lalu Prasad Yadav’s elder Lal Tej Pratap Yadav himself. Tej Pratap, who is angry with both the party and the family, has created a political earthquake in Bihar by saying this on Saturday.

By the way, the internal war between Lalu family and their party is going on for a long time and their eldest son is making explosions by saying similar things from time to time. It is said that Lalu Prasad is currently recuperating at the residence of his elder daughter and Rajya Sabha MP Misa Bharti in Delhi, but in the meantime Tej Pratap Yadav has made this big allegation. This statement of Tejpratap Yadav One thing has become clear from this that the war that broke out between the Lalu family and their party RJD months ago has now reached its final point. Tej Pratap exploded several political bombs on Saturday. He also made serious allegations of extortion against Yuva RJD’s state president Qari Sohaib.

Not only this, but he also publicly narrated an audio recording of Kari Sohaib. On the other hand, Lalu-Rabdi’s elder son Tej Pratap made the biggest attack on Tejashwi Yadav on Saturday. Tej Pratap Yadav said that Lalu Yadav has been kept hostage in Delhi, he is not being allowed to come to Patna.
Tej Pratap Yadav, MLA from Hasanpur in Bihar, also indirectly attacked his brother-in-law and Leader of Opposition in Bihar Tejashwi Yadav and said that those who are dreaming of becoming the national president of RJD will not let their dreams come true.

Let us inform that after the leave of the state president of RJD, a student of Akash Yadav, close to Tej Pratap Yadav, he has formed his own separate organization. Akash Yadav, however, has now moved to the LJP’s court. He had organized a training camp for this organization named ‘Chhatra Janshakti Parishad’ on Saturday. Addressing his supporters in the same camp, Tej Pratap said, “Our father is in Delhi. We talked to father, come with us to Patna. We’ll be together. Come see you. When he lived, the door of our house was open, he used to sit in the outhouse and used to do the work of meeting the great public. What did some people do.. got a rope tied to meet the public. People stay away from us. Wah ji wow.. not allowing our father to come. They are kept hostage in Delhi.

Without naming his uncle Tejashwi Yadav, Tej Pratap said among his supporters that some people have dreamed of becoming the National President of RJD. Everyone knows who they are. There is no need to name them. It’s been a month, a year since father came from jail. The same people have kept our father in Delhi itself. Tej Pratap Yadav said that he will not allow the dreams of such people to be fulfilled.

Let us tell you that a few days ago Tej Pratap had attacked Tejashwi Yadav’s personal secretary Sanjay Yadav. He blamed them directly for causing a rift between the two brothers and even alleged that they could be murdered.

Tej Pratap Yadav while addressing the training camp said that the organization will not increase but will break with the work being done in the party. It’s not going to work like this. Tej Pratap said, my father is going unwell, so we do not want to give any kind of pressure. They are battling the disease. Some people are taking illegitimate advantage of this.

By the way, after Tej Pratap Yadav’s speech on Saturday, one thing has become clear that the fight of Lalu family has now reached a turning point. Let us tell you that Tej Pratap Yadav has kept distance from RJD for more than a month anyway. Before that, he had made a very scathing attack on Tejashwi Yadav to his special Sanjay Yadav and RJD State President Jagdanand Singh.

Tej Pratap was upset that his special and student RJD president Akash Yadav was removed from the post. The matter was not just about removal, but Tej Pratap was looking after the work of the student RJD for a long time and he was evicted from it. Say that in a way he was completely thrown out of the party.

Let us inform that after this ruckus broke out in the party, Tej Pratap had also gone to Delhi last month. There he met Lalu Prasad. It is reported that when Lalu Prasad asked him to remain calm, Tej Pratap had formed a new organization, the Student Janshakti Parishad. During this, Tej Pratap did not participate in any RJD meeting or program. By the way, even before this, he was out of all the posters and banners of RJD.

People associated with RJD are telling that Tej Pratap Yadav is now in the mood to fight a decisive battle. Although he is softening a bit under the pressure of Lalu Prasad Yadav, but he has also given up calling Tejashwi as Arjun and himself as Krishna. Tej Pratap’s close friends tell that he now wants to become Arjun himself.

However, no MLA (MLA) or big leader of RJD is with Tej Pratap at the moment. So he has just made his own separate organization. Like a political party, they have registered it from Registered to Symbol. Tej Pratap will start his political fight with the help of this organization for the time being.