Lakhimpur Violence: Congress shouts in favor of farmers, Priyanka-Rahul hugs the relatives of the deceased farmers 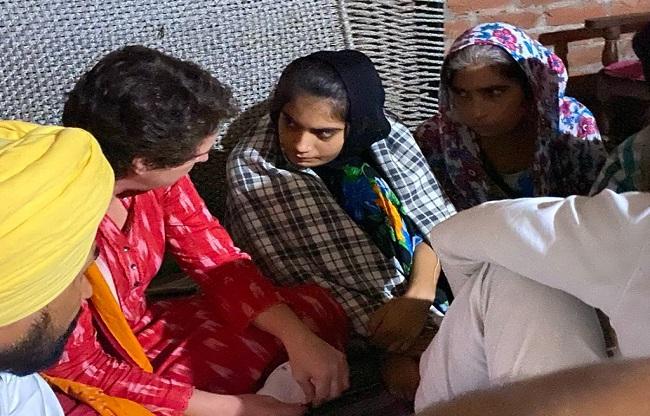 In Lakhimpur Kheri, Uttar Pradesh, there was tremendous violence before the riots of the assembly elections, 8 people lost their lives. Wrestling between the government and the opposition continues on this violence. After this sensational incident that happened just before the assembly elections, the race among the opposition parties to reach the first victim and the spot started from Sunday and continued on Wednesday as well. Today Rahul Gandhi and Priyanka Gandhi reached Lakhimpur Kheri and met with the aggrieved farmers. Lakhimpur Kheri district of Uttar Pradesh remains the biggest arena of Indian politics. All the political fighters sitting in the opposition are competing to reach here. In this episode, from Wednesday, Rahul Gandhi has started a battle against the government in the name of Lakhimpur Kheri, while Priyanka Gandhi is already standing on the front. Rahul Gandhi reached Lucknow first on Wednesday. From there Rahul Gandhi left for Sitapur. Chhattisgarh CM Bhupesh Baghel, Punjab Chief Minister Charanjit Singh Channi were present with Rahul Gandhi. Rahul’s convoy from Lucknow reached Sitapur directly. From where Priyanka Gandhi also joined Rahul’s convoy. After which the team of 6 people left for Lakhimpur Kheri and met the families of the deceased farmers late in the night. In Palia Kalan, he met the family of the deceased farmer killed in the violence. In Palia, Rahul-Priyanka talks to Lovepreet’s parents and both sisters and consoles them. After meeting here, both the leaders met the family of the deceased journalist in Nighasan.

Signs of political earthquake in Lucknow

There was a lot of ruckus in Lucknow before Rahul Gandhi left for Lakhimpur Kheri. Rahul Gandhi reached Lucknow from Delhi at around 2 pm. As per the schedule, Rahul would travel from Lucknow airport to Sitapur, where he would meet Priyanka. Then from there Priyanka-Rahul left for Lakhimpur, but before that there was a tense atmosphere at the airport. Rahul Gandhi was stopped at the airport itself. He was accompanied by Punjab CM Charanjit Singh Channi and Chhattisgarh CM Bhupesh Baghel. In a conversation with the media, Rahul Gandhi said that he is not being allowed to go beyond his car and he sat on a dharna at the airport itself. Rahul targeted the Yogi government that what kind of permission is this? Actually, the force says that to go to Lakhimpur, the administration has to go through the escort and route. But Rahul did not agree to this. Rahul said, the government wants to do some bullying, I don’t know what but they have some plan. They want to take me in a police car like a prisoner. The story of the new controversy was getting more complicated. To make this deteriorating matter, the administration allowed him to go by his car with some rules.

By the way, on the first day itself, Congress General Secretary Priyanka Vadra left for Lakhimpur after reaching Lucknow from Delhi, but was stopped in Sitapur and taken into custody. After the announcement of going to Lakhimpur Kheri, National General Secretary of Bahujan Samaj Party Satish Chandra Mishra was placed under house arrest. Chhattisgarh Chief Minister Bhupesh Baghel was returned from Lucknow airport. Samajwadi Party chief Akhilesh Yadav and PSP president Shivpal Yadav took to the street in Lucknow to protest, who were later released in custody. Aam Aadmi Party MP Sanjay Singh was also taken into custody in Sitapur. Samajwadi Party National President Akhilesh Yadav, Bahujan Samaj Party National General Secretary Satish Chandra Mishra and former Punjab Congress President Navjot Singh Sidhu will visit Lakhimpur Kheri on Thursday to meet the families of the victims. Well, in the midst of this political turmoil, the real question still remains the same that who is responsible for the deaths of people in Lakhimpur and why has he not been arrested yet?