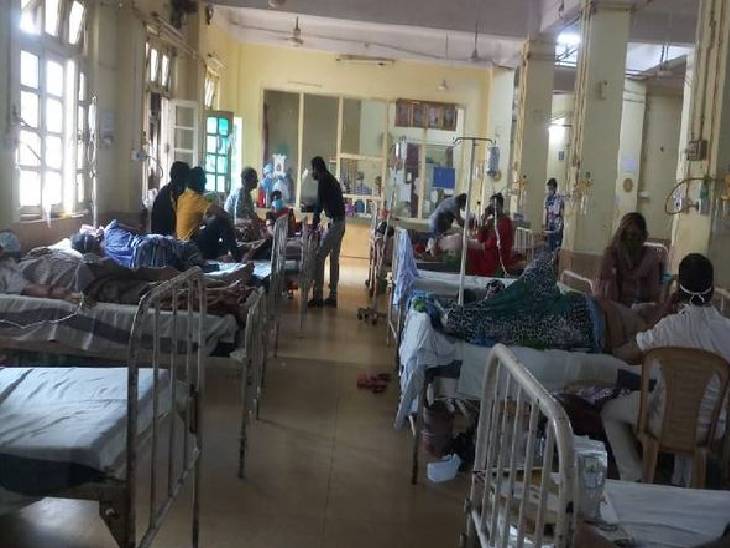 A youth suffering from dengue has come under the grip of black fungus in Jabalpur, Madhya Pradesh. This is the first such case in the state. Both the eyes of the victim have been affected. The patient’s platelets have become normal, but the pus is filled in the lower part of his eye, which will be removed by telescopic method. Doctors are also surprised about this case of black fungus after dengue.

According to Dr. Kavita Sachdeva, Head of ENT Department of Jabalpur Medical College, this patient had come a week ago. This 40-year-old patient, resident of Jabalpur, had dengue. He stayed at home for a few days and got treatment from the local doctor. After that his eyes turned red. He showed it to the ophthalmologist, so even he could not understand. After this, he was shown to another eye specialist, then he was referred to the medical ENT department.

First dengue was treated, now black fungus operation will be done
According to Dr Kavita Sachdeva, the victim was first treated for dengue. During this time he was given medicine for black fungus. Now the dengue patient is completely cured. Platelets are also normal. After necessary investigation, he will be operated for black fungus. A lot of pus is filled behind both the eyes of the patient. It will be operated near the nose with a telescopic method.

This disease was to disappear by August
Dr. Kavita Sachdeva told that this disease was to end by August, but it is shocking to come to the fore of dengue victim being black fungus. The patient did not even have covid nor does he have sugar disease.

Sachdeva and other doctors believe that the local doctor may have given some medicine in the treatment of dengue, which has a reaction. Due to this the victim may have come in the grip of black fungus. Or it could be that he had mild-impact covid before dengue and he was not aware of it.

Even now 14 infected people of Damoh, Chhindwara, Balaghat and Jabalpur are under treatment. It also includes a unique case of dengue afflicted black fungus. In view of less number of patients, four wards for black fungus have been reduced to one.

The risk is higher if the immune system is low
According to the specialist doctors of the ENT department of the Medical College, the risk of getting infected with black fungus increases when the immunity is low. At the same time, those who take high doses of steroids are also at risk. Patients become temporarily diabetic after taking this dosage. This is the time when the black fungus takes hold.

Get treatment as soon as symptoms come, then the disease will be cured
According to Dr. Navneet Saxena, HOD of the Department of Ophthalmology in the Medical College, treatment is possible based on the initial symptoms of this disease. Symptoms include headache, fever, black discharge from the nose, swollen eyes, red eyes, reduced vision or double vision.

On the other hand, according to Dr. Kavita Sachdeva, avoid dust. Eat something only after washing your hands. Keep the sugar between 150 to 200. If there is black water coming from the nose, redness of the eyes, crusting in the palate, then immediately show it to the OPD of the ENT department. If the black fungus spreads to the brain, then life can also be lost.