Muslim ruler India’s blot or pride, who is the national hero, Akbar or Maharana Pratap? 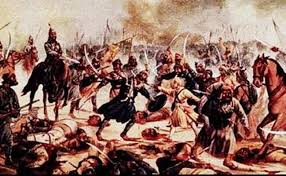 Questions are being raised once again on the rule of Muslim rulers in India. The question is, how true is it to call India the slave of Muslim rulers. Prime Minister Narendra Modi, while meeting US President Joe Biden at the White House on September 24, said that he has brought some documents related to the Biden surname in India. On this, President Biden laughed and asked if we are relatives, in response PM Modi laughed and said, yes. Tweeting the news of the meeting between the two leaders, Pakistan’s eminent journalist Hamid Mir wrote, “It is good that Narendra Modi handed over the documents of their family ties to Biden. The Indian prime minister can also find and be proud of the family ties of the Muslims living in India with the Arab rulers.

Now let us tell you another incident of February 2020 which is related to Pakistan Prime Minister Imran Khan. When Turkish President Erdogan visited Pakistan in February 2020, Imran proudly said in a joint press conference that the Turks ruled India for 600 years. Imran Khan said, we are all happy with your arrival because our community understands that we have relations with Turkey for centuries. The Turks had ruled India for 600 years.

President Biden said of the Biden surname in India, he had learned that a man named George Biden was a captain in the East India Tea Company. Biden is talking about the same East India Company that enslaved India. On the other hand, Imran Khan called the Muslim rulers of the medieval period Turks, proudly saying that they ruled and hence their nation gets happiness. Pakistani historian Mubarak Ali said in a conversation with a private channel that, showing such affinity of Indian leaders towards whites and the feeling of pride seen in a section of Pakistanis and Muslims towards medieval Muslim rulers, is disturbing. . Mubarak Ali says, when a Muslim says that we have ruled India for a thousand years, the Hindu will think that Muslims do not consider themselves to be here. Because of this clad pride, it becomes easier for Hindus to call Muslims outsiders. Muslims should think that the Muslim rule in medieval India was not the rule of ordinary Muslims. It was a ruling class. When you say that Muslims ruled you for hundreds of years, it gives the impression that Hindus were kept suppressed.

Whose oppression on India?

Mubarak Ali further said – Even the British who oppressed us immensely, now there is no sense of pride in them even when the Muslim rulers had adopted India. The soil here is considered as its soil. This pride of religious Muslims about those Muslim rulers is irritating to Hindus. If you read the books that are being taught in the schools of Pakistan, it seems that all the Muslim rulers were brave and the Hindus surrendered before them, while this is not true. Mubarak Ali says, Pakistan’s books only create hatred towards Hindus and India. The ruling class here feels that the Muslim rulers of the medieval period were their own and they kept the Hindus straight. See the name of missiles and weapons here – Ghazni, Ghori, Ghaznavi. This mentality acts as energy for right wing Hindu politics and it makes life difficult for the Muslims living in India.

India caught in the chains of slavery

Narendra Modi was speaking in the Lok Sabha on June 11, 2014 for the first time after becoming the Prime Minister. In his very first speech, Modi had said, the slavery mentality of 12 hundred years is disturbing. Many times we meet a person a little higher than us, then we do not have the power to talk with our heads held high. This talk of the Prime Minister raised many questions at once. Was India a slave for 1200 years, was India a slave even before the British rule. When PM Modi talked about slavery of 1200 years, he described India as a slave from the attack of Mir Qasim on the Hindu king of Sindh in the eighth century till 1947. The British rule in India is roughly considered to be from 1757 to 1947, which is 190 years. Accordingly, India spent the rest of the thousand years of slavery under Muslim rulers. According to school books in India, India has been considered a slave since the victory of the British against the Nawab of Bengal in the Battle of Plassey in 1757, but now there is talk of changing history in India and it is said that in the medieval period The Muslim rulers were invaders and they kept India as a slave.

Truth of slavery of Muslim rulers?

There are different interpretations of the medieval period, says Irfan Habib, a well-known historian of medieval times in India. Communal historiography began in the 19th century. Not only did the British do this, Hindus and Muslims also did this. Dividing Indian history on the basis of religion is not a new thing. People associated with the freedom struggle kept saying that India was a slave of British rule, on the other hand Hindutvaists say that there was foreign rule in India from 13th century or even earlier. Habib says, Muslim historians like Ishtiaq Hussain Qureshi call the medieval period the period of Muslim rule. Even the people of Muslim League say that they ruled the whole of India. Such an interpretation of history is from both sides and true nationalists reject this interpretation. Irfan Habib says, many rulers of the medieval period were born abroad but they adapted themselves to Indian colors. Those who fought for independence argue that the British rule was completely different from the era of Muslim kings before them because the British were taking away the property of India but the Muslim emperors kept the property of India in India.