Lucknow: Office made of clay, electricity bill comes only Rs 350 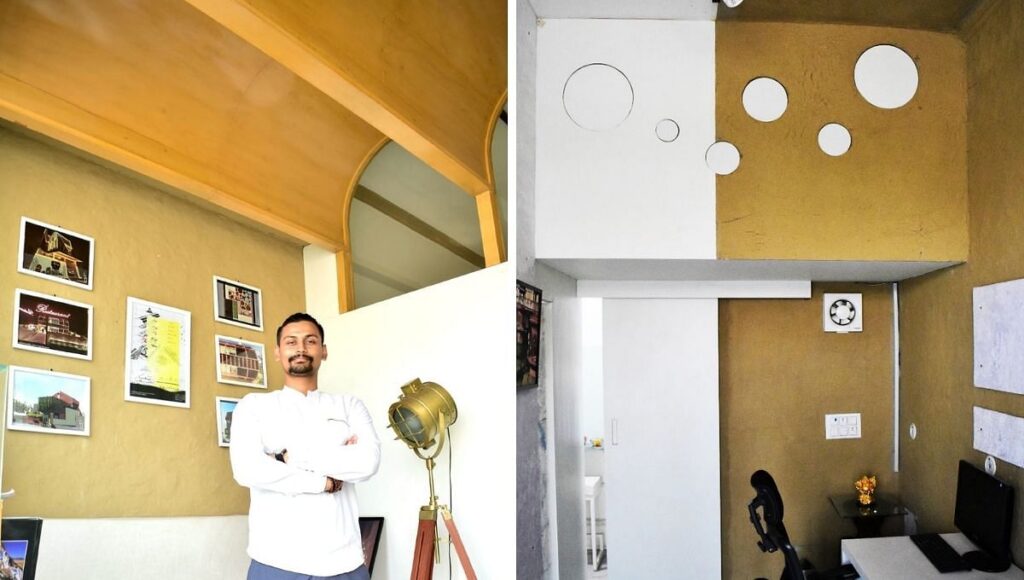 In the city and even in the village, nowadays people are making concrete jungles in the name of modernity. But such buildings are not conducive to our environment as well as health. Just as we are emphasizing on the use of organic fruits and vegetables in our food, why are we not choosing eco-friendly items for home making? Answering some similar questions, Anant Krishna, a young architect from Uttar Pradesh.

Anant Krishna of Lucknow, has tried a better way to make people understand the importance of natural things in building a house. He started it from his office. In fact, he has given a new look to his 300 square feet concrete office in Lucknow’s Gomti Nagar using clay and local carvings of wood.

Anant told The Better India, “The profession I am in, we have to work according to the needs of our clients. But I want people looking at my office to ask me questions about mud and vaulted ceilings and I tell them the benefits of it. I believe that people do not get inspired by listening to your words, but by seeing your work.

Concrete office made colder than clay

Hailing from Lucknow, Anant has studied architecture from Amritsar Guru Nanak Dev University. Thereafter, he worked for a few months in Delhi. He then returned to Lucknow and joined a firm called Skyline Architecture here. But during the lockdown, he decided to start his own business and started a company called Advance Group of Architects.

Anant considers his mother as his inspiration. His mother is a civil engineer by profession and is also a partner in his company.

Talking about Sustainable Building, he says, “In the very first year of our studies in architecture, we were told that years ago when there were no electricity facilities, then buildings were made keeping in mind the sunlight and wind direction. Was. Therefore, according to me, a sustainable building is one in which least artificial energy is used and maximum local materials are used. But usually every client just likes the modern look and is not bothered about other things.”

Anant wanted to make people believe with his work that even with traditional techniques, a modern house can be ready. So he thought of making his office an example.

When he took this office on rent, it was in a dilapidated condition. But today it shines in a different way among all the shops nearby. Anant says, “Whoever passes by here, must stop once and see it. Because we have made it in the style of special Lucknow.

Lucknow was known for its domed roofs, but after the recent construction of the Modern Building, people are forgetting this technique. So Anant kept the local architecture in mind. Instead of having a false ceiling of the roof, he built a vault roof with local wood, so that people could see the image of ancient buildings in it.

Regarding the use of soil in house construction, Anant says, “Since Uttar Pradesh is an agricultural state, different soil types are found here. I thought why not paint the concrete walls with mud and add to the real identity of the state.”

He has used gray and yellow soil available in the village near Lucknow in his office. Gray colored clay is commonly used for making idols. Whereas, the yellow soil is used for painting the houses in the village. Due to the use of soil, the temperature inside the office remains four-five degrees less than outside. At the same time, despite being a small space from the vaulted roof, it feels open here. He told that it cost him about seven lakh rupees for this work. At the same time, they will have to paint the earth on the walls every five years.

Anant’s entire office is divided into five parts. First is the lobby part, in which along with vault roof and earthen wall, they have also kept some indoor plants. As soon as you come inside, you will feel connected to nature. At the same time, he has used glass for the partition in his cabin and studio and painted it white, due to which it also acts as a whiteboard. The remaining two parts are the bathroom and the pantry.

The entire place receives good sunlight during the day. At the same time, due to the soil, the temperature inside remains normal.

Anant says, “We don’t have a fan in our studio. Despite this, it is not hot here. At the same time, keeping in mind the heat of Lucknow, we have installed an AC for the office. Which is needed very little. You will be surprised to know that in March, the electricity bill of our office came to Rs.350. Due to AC in summers, the bill increases a bit which is not more than 600.

The work of potting soil was full of challenges

Anant wanted to paint the concrete walls with mud. However, this task was not that easy. He asked many people in Lucknow, but everyone refused to do this work. After which, he went to the nearby village and inquired about it from the people. He says, “Everyone in the village knows how to build a mud house. Then I called some village people for help.”

He first put a net of chicken mesh on the wall. After this, a mixture of gray colored soil and straw was applied. Then a coating of cow dung and yellow soil was applied and lastly the work was done by mixing fevicol in yellow soil.

However, when he planted it for the first time, the entire soil was removed within a few days. Later, he came to know from the villagers that every layer of cow dung and soil takes time to dry and only after one layer has dried, another layer should be applied. Eventually he got success.

Attracts many people, this office of his

Anant says that earlier people used to think of mud wall as wall paper. But when they touch it they think that it is a wall of mud. Many people reach his office and ask many questions about making the house in a natural way.

Abhishek Srivastava, who worked in an IT company in Bangalore, met Anant to build an eco-friendly farm house in his ancestral village in Barabanki district of Uttar Pradesh. Abhishek says, “I was looking for architects to build eco-friendly farm houses in my village. That’s when I came to know about Anant Krishna and went to meet him. As soon as I entered his office, I felt that everything is natural here. He has also made his office environment friendly. That’s when I thought that he would be my architect.”

Abhishek wanted to build his farmhouse out of mud and lime without using concrete. But he also had to give a modern look to his farmhouse. He was so impressed with Anant’s office that he immediately handed over the work to him. In the coming few months, the work on his farm house will start.

Due to Anant Krishna’s thinking and experimentation, many people are now in touch with him. If you would like more information about Anant’s firm, click here (https://www.advancegrouparchitects.com/). You can also contact him on 9872948722.

Ujjain: On the pretext of election campaign, the house of bookie was raided, the senses of the police were blown away after seeing crores of gold and cash