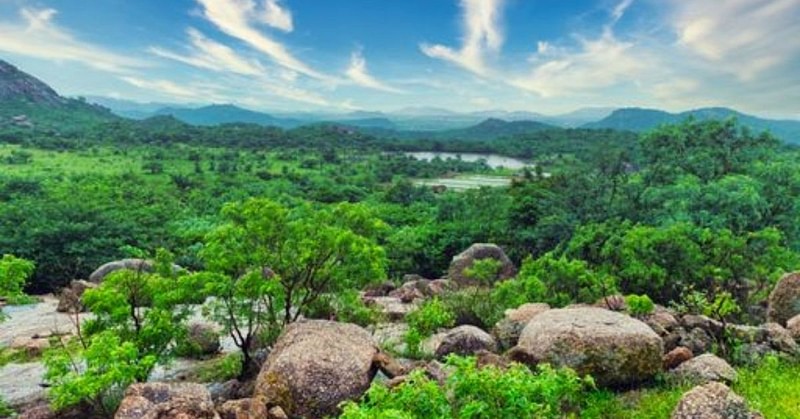 Sunith Reddy, a businessman from Hyderabad, wanted to live a simple life, away from the hustle and bustle of the city. He did not like urban life. Being close to nature, he wanted to feel it. Sunith has The Better India Told Ko, “Like a lot of people, I was tired of my urban life and lifestyle and then decided to move away from it. I wanted to connect with nature and for that I found farming a better option.”

Between 2015-16, he switched to organic farming on a small piece of land in Bengaluru. But soon they started facing problems. He started to understand the ground reality of farming.

When to learn about the challenges faced by small farmers

He says, “I knew a lot about the challenges faced by small farmers. Personally, I interacted with many farmers. Many people had bought land for farming and were doing weekend farming. Some of these were successful, but many people gave up after struggling with problems for a few years. The recurring expenses, handling the workers and spending on essentials, were making them financially weak and there were many other challenges which they were facing.”

“Despite all this, even if the crop was harvested, the result was not as good,” he said. After talking to the farmers, Sunith came to know that farmers engaged in full-time farming have been more successful than weekend farming. He says, “Big farmers or say farmers who were cultivating large land, their success rate was much higher. But not everyone can buy a large part of the land. Then the idea came to my mind to do organic farming by joining small farmers collectively. I thought it could be worked on.”

and then left Job

In the year 2017, Sunith took a big decision, which changed his life. He created the Community Forest Project to bring like-minded people together and named it ‘Be Forest’. To pursue this plan, Sunith had left his established job.

The IIT Madras alumnus says that apart from his friend Shaurya Chandra initially, only five other people were associated with the scheme. He started looking for land in Hyderabad for this. They needed about 10 acres of land. He says, “We all started working on small patches of land together. The initial results were very good. After that we started expanding our collective farming. Within a year, many people joined our scheme and gradually the number kept on increasing.

“We created a sustainable forest and a place to live by meeting the needs of electricity, water and food through regenerating agriculture,” he said.

He explains, “There are many people who want to leave the urban life and live near nature. This startup helps them to carve a niche of their own in a self-sustaining jungle. There are many types of trees and crops around the houses built here. Also, these houses are made up of local ingredients with modern amenities.”

Sunith said, “Here the natural habitat of animals and no obstacle is put in their way. In fact, we live here in harmony with nature, without affecting the lives of the local community.”

According to him, this community farming has been designed based on the principles of permaculture. Where the existing available resources are used optimally.

do it together Work

Sunith further explains, “Unlike the traditional farming method, here the land is owned by a group and not with an individual. Every person connected to it can come anywhere in water bodies, hills, forests, fields and other parts of the forest. Here collective work is done.”

He explains that through a chartered course prepared collectively, all the farmers associated with the group are given information about how and what to do. Along with this, it is also decided how to divide the income from farming among themselves. Sunit said that this community also helps the local farmers to get the right price for their cultivation and take them to the right market.

In fact, they are also acting as a network to create potential for new industry potential.

Sunit claims that his group is completely self-sufficient. Minimize energy consumption. The emphasis is on local materials to build the house. The everyday life is inspired by the rural lifestyle. We have built our shelter where there is water around.

He says, “What are we getting out of this? If we talk about it, in return we are getting fresh clean air, clean water, less noise pollution and food full of health properties. Apart from this, many more can be added to it, such as common values ​​shared by the community and understanding of the area, land and farming methods etc.

His startup currently has 160 members, which are part of a 400-acre community forest in Coorg and Pumale, Hyderabad. Sunith explains, “Two more collective plans are underway near Mumbai and Chikmagalur, which will increase the collective farming land to 1,000 acres. Presently this community is growing crops like Coffee, Moringa, Bajra, Banana and many more.

Kranti Kakkabe, a member of Bee Forest, said that he had come to know about this community from his friends. He says, “Some of my friends were associated with the group from Hyderabad. I really liked this idea. Me and my wife always wanted to be close to nature. The best aspect of this scheme is that no farming is done here for any commercial gain.” Kranti explains that all the members collectively plan to save and conserve nature.

Sunith said that initially it was a bit difficult to convince the members about doing community farming. “It becomes very difficult to tell the buyers that this is not just their agricultural land and it is not a real estate venture. It takes a long time to explain how a new concept will work. I knew that until they experienced it themselves, they would not understand it. That’s why for the first one year, we kept giving full support to those farmers.

He concluded by saying, “For the last few decades, there has been no attention towards sustainability. This is the time to reconnect with nature and draw a roadmap for the holistic development of man and nature.