Attention Amazon Prime users! Buy these Samsung and Xiaomi smartphones at 40% off 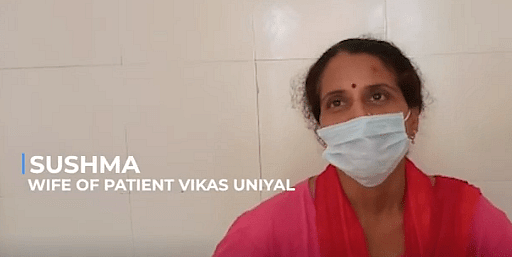 India is a secular country. Here all religions are considered equal. People from Hindu, Muslim, Sikh, Christian to Buddhist and Jain religions live here. Despite this, there are many such incidents, due to which the gap between religions starts widening. But do you know about those two women, whose religion is different, yet in order to save the life of each other’s husband, both women have got kidney transplant done? Come, read his story.

set an example of humanity

Sushma Uniyal, 48, and Sultana Khatoon, 46, who live in Dehradun, decided to donate their kidneys to save each other’s husband’s life. The husbands of both the women were suffering from severe kidney disease and were in need of kidney donation. In such a situation, both the women decided to help each other.

When Vikas Uniyal’s wife Sushma Uniyal was asked, she told that she cannot express her gratitude to Sultana Khatoon in words. She told, “Sultana Khatoon’s family has helped me, which I can never forget in life. We have decided to help each other and there is an atmosphere of happiness in our family.”

At the same time, Sushma Uniyal donated a kidney to Sultana Khatoon’s husband, Ashraf Ali. He says, “Sushma ji has become my spiritual sister. The bond of humanity is stronger than any relationship in this world. Ashraf Ali’s wife Sultana Khatoon says, “My husband’s life is saved because of Sushma ji and her family. I will remain grateful to him.”

When Doctors said that kidney will have to be transplanted

Sushma Uniyal said that her husband’s kidney was adversely affected to such an extent that he was on hemodialysis for more than two years. “At such times doctors asked for kidney transplant, but then I tried to arrange kidney among family members and relatives. But we couldn’t. When we were at the Himalayan hospital, where my husband Vikas Uniyal was undergoing treatment, the doctor at that hospital told that there is a patient, Ashraf Ali, who needs a kidney,” she said.

Sushma Uniyal said that they decided to help each other through the paperwork related to kidney donation. Then both gave kidney to each other’s husband.

The team of doctors said that there is improvement in the health of both the patients Vikas Uniyal and Ashraf Ali. Now both are fine already. “Both the transplants have been successful and we are currently monitoring the health of both patients,” says Dr. Kim J Momin of the kidney transplant team.

Sushma and Sultana are inspirations

Anno Nautiyal, a social activist from Dehradun says, “This is a story of our culture and social values ​​which we cannot forget. There is nothing more important than helping each other in times of need, saving a person’s life. We all should take inspiration from these two great women.”

Also read: Harita Kaur: The first woman pilot of the Indian Air Force, flew the plane without a co-pilot at the age of 22

Women in Taliban: Life of women became hell under Taliban rule, conditions like starvation in front of lonely and widows