Grow 60 types of fruits at home, more than 1000 plants, know how they use every corner 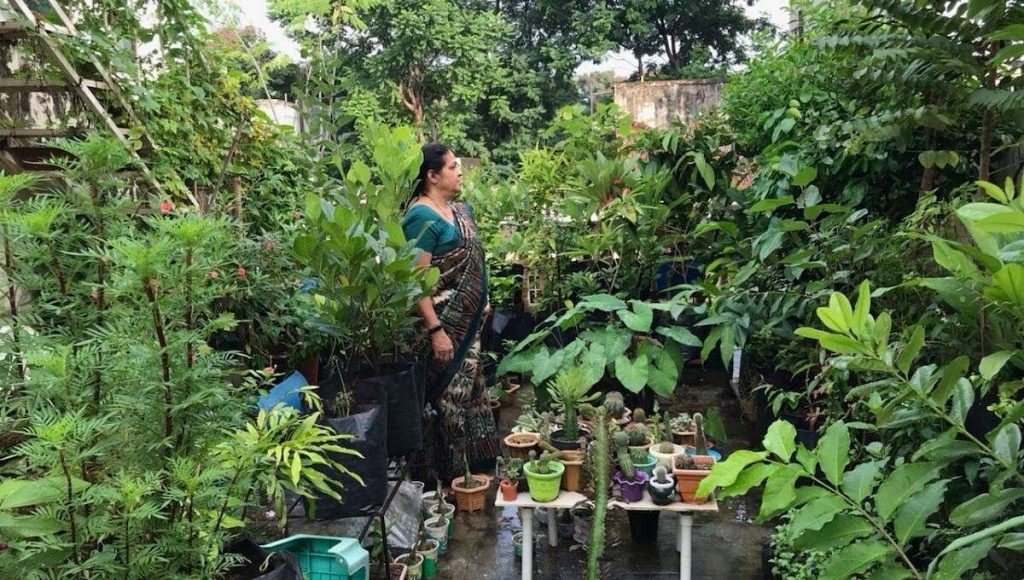 Whenever Deepti Patel, 56, a resident of Surat, goes on a long holiday, she is more concerned about her own grown trees and plants than her own house, and why not? For years, she has been taking care of these trees and plants like her own children. Starting with small efforts, today he has made his house green by planting more than 1000 saplings.

Deepti, who was fond of gardening since childhood, always had a place to plant trees and plants. This helped him a lot to pursue his hobby. Today she grows over 60 varieties of fruits, all seasonal vegetables including many varieties of roses, cactus, water lilies, at her home.

After her work, Deepti, a teacher by profession, finds time for gardening and does all the garden work herself. The Better India While talking to her, she says, “For years my evening time is spent with these trees and plants. With them, my whole day’s fatigue and stress of any kind are removed.

horticulture from farmer father fond of

Growing up in Ahmedabad, Dipti’s father used to do farming along with the job. Learning little from him, she used to plant flowers in her childhood. He told that he was very fond of growing roses, he also started with rose and hibiscus plants. During the 1980s, she also used to grow some vegetables at home in the winter. But when she came to Surat after marriage in 1987, she had a place at her house, but no one was fond of gardening in her in-laws’ house.

She says, “After coming to Surat, I again started with planting flowers and some ornamental plants. Slowly I started growing some vegetables and fruits like pomegranate, chikoo, cilantro in a big pot, which my family members liked very much and within a few years my house was filled with many trees and plants.

Many information received from gardening course

He never hired a gardener to work in his garden. He believes that man learns the most from his own experience in gardening. Wherever Deepti used to get information related to gardening, she kept taking it and also tried to try it. He also did a short three-day terrace gardening course. He told, “In 2008, a stall of Agricultural University was put up in a fair at Vanitha Vishram Ground in Surat. There, he was giving information about the course of terrace gardening. I registered there immediately. This course was of only three days, in which we were taught from making compost to growing vegetables according to the season.”

During this course, Deepti also formed a gardening group, from where she started getting new seeds and all the information she needed. What was then? His hobby had taken wings. Earlier she used to grow vegetables only in winter, but after training she started growing some vegetables throughout the year.

Over time, he came to know about online shopping. He ordered the seeds of many exotic varieties of fruits including avocado, dragon fruit and ordered online.

Growing fruits and vegetables for the family

After school and getting up early in the morning, she makes time for gardening for three to four hours every day. At present, he has three varieties of guava, two varieties of papaya, three trees of pomegranate, two varieties of dragon fruit, two varieties of sitaphal including figs, Ramphal, Lakshmanphal, Safed Jamun, Orange, Mosambi, Apple, Banana Apart from cherries, passion fruits, such fruits have also grown, whose names we have hardly heard.

Although she has a large terrace of 100 yards, seven foot tall beds on either side of the house, she says that she lacks space to plant. He has planted ornamental plants in the front part of the house. While there are some big trees in the beds built on both sides of the house. He has planted all the rest of the plants by making beds on the roof and using grow bags.

She grows all these plants without any chemical fertilizers and pesticides. She prepares 500 to 600 kg of compost every six months from her household wet waste and garden waste. At the same time, when the compost is low, she brings vermi compost from outside and uses it.

She said, “For the last two years I have been growing varieties of cactus and water lilies as well. Now there is not even a little space left on the roof. My family members also tell me, just do it now.”

Deepti advises terrace gardeners, after waterproofing, to make a bed slightly above the ground. This greatly reduces the chances of damage to the roof and the house.

Hope you enjoyed reading about the wonderful Garden of Deepti.

Also read: Black gold made from garbage, made all the women of the village self-reliant