Goddess Brahmacharini in the form of penance (Navratri- Devi Brahmcharini) 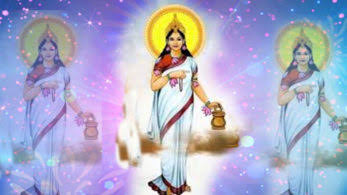 Goddess Brahmacharini in the form of penance (Navratri- Devi Brahmcharini)

Goddess Brahmacharini is the form of Brahma.

Here Brahma means penance i.e. the embodied form of penance.
This goddess is famous by many names, such as-
Tapascharani, Aparna, Uma etc.

The Brahmacharini form of Maa Durga is specially worshiped on the second day of Navratri for attainment of accomplishment.

The second form of Maa Durga is the one who gives infinite fruits to the devotees and Siddhas.
Goddess Brahmacharini is the daughter of Himalaya and Maina.
She did severe penance to get Lord Shankar as her husband.
Due to this difficult penance, she was named Brahmacharini.
She is considered the goddess of sacrifice and penance.
She holds Akshamala in her right hand and Kamandal in her left hand.

Worshiping them increases tenacity, restraint, renunciation and virtue in our life.
Before worshiping them, take a flower in hand and pray this-
Dadhana karpaprabhayamakshamalakamandlu l
Devi Prasidatu Mayi Brahmacharinyanuttama ll

After this, after bathing the goddess with Panchamrit.
Offer flowers, akshat, roli, sandalwood, kumkum.
The goddess especially likes the flower of Arhuul (a special red flower), so if possible, make a garland and wear it.
According to the belief, on this day such girls are worshiped and welcomed, whose marriage has been fixed, but not married yet. After calling them home, they are given food after worship and clothes are given as a gift.

According to Dr. Madhuraj Vastu Guru, the sages tried to understand and explain the importance of Navratri in scientific perspective with utmost precision. Many obstacles of nature get destroyed in the night. Even modern science agrees with this. How many thousands of years ago our sages and sages had known these scientific secrets of nature.
If it is called during the day, it will not go far, but if it is called at night, it will go very far. Behind this, apart from the noise of the day, there is also a scientific fact that during the day the sun’s rays stop the sound waves and radio waves from moving forward. Radio is a living example of this. Low power radio stations are difficult to catch during the day, whereas even the smallest radio stations can be easily heard after sunset.
The scientific principle is that the way the rays of the sun block the radio waves during the day, in the same way the thought waves of mantra chanting also get interrupted during the day, that is why the sages have told the importance of night much more than the day. . Due to the vibrations of the bell and the sound of the conch in the temples, the environment becomes free of germs from far and wide. This is the scientific secret of the night, who, keeping this scientific fact in mind, sends their powerful thought waves into the atmosphere in the nights with determination and high concept, their work accomplishment, that is, the fulfillment of their desires, according to their auspicious resolution, at the right time and the right method. Must be done accordingly.

Raktambara Raje
The garland of blood flowers is decorated on the garland. Jai Ambe…

you are the mother of the world
The remover of the sorrow of the devotee, the doer of happiness and wealth, Jai Ambe…

Also read: Why do we clap in Kirtan and Aarti? (Spiritual And Health Benefits Of Clapping While Aarti And Kirtan)