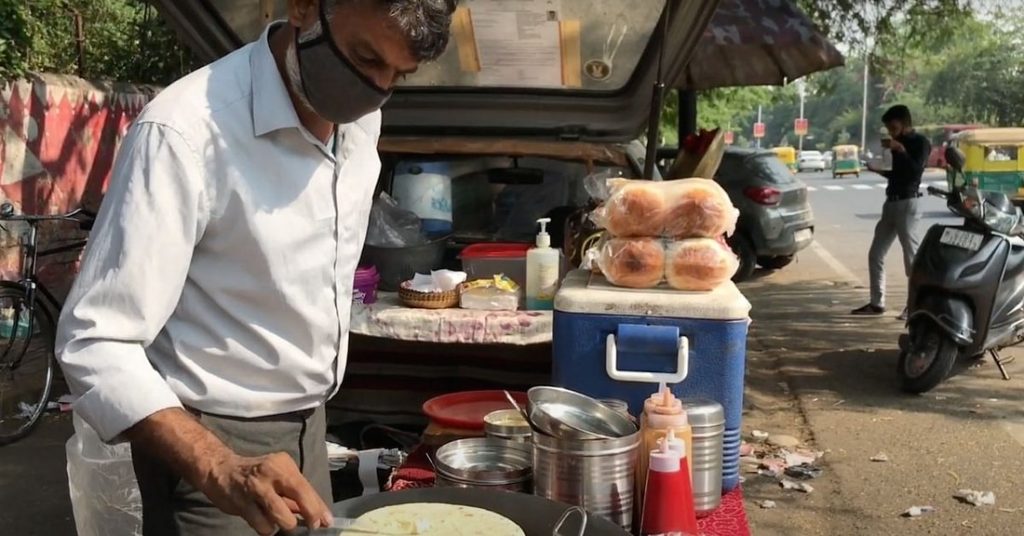 An old Maruti 800 car, they also have a moving kitchen and a food stall. From 9 am to 10 pm, he sells burgers, burritos, tacos, tortillas and sandwiches at his stall. Which has become an identity of IIM Ahmedabad today. 47-year-old Parthiv Thakkar is also known by the name of Fakira Burger Wala. He started his Mexican and American fast food stall in the year 2020, which was well-liked on social media.

Born and brought up in Ahmedabad, Parthiv moved to America at the age of 21. He is a drummer and singer by profession and was living in America for a long time. He also spent some time in England, but had to return to India in 2020 when he learned that his wife had cancer.

When the mortals were slowly losing everything

The Better India He says, “My work was such that the day time was free for me. Most of my shows used to happen in the evening. That’s how I started working in Pub and learned to make burgers, hot dogs and everything else there. All these are eaten with great liking in foreign countries.

Parthiv came to India and started looking for work. But nothing was happening anywhere. He explains, “That time was not good for us. My wife was undergoing treatment, the cases of Covid were increasing. Traveling to other countries was stopped. Whatever money I had, slowly started running out. Then my daughter advised me to set up a food stall outside the Indian Institute of Management, Ahmedabad. She used to go there often. The idea to start this business was found at that time, when I felt that I was losing everything. It was an idea with which I could move forward.”

Life came to a standstill due to Covid 19

He says, “Being an artist, Covid has affected my life a lot. Social gatherings were banned. No shows were being organized, which simply meant, for a long time there was no income for artists like us. Coming to India and rising expenses on my wife’s illness put me in an awkward position.”

He said, “I did a lot of research before starting the business. Took stock of the surrounding areas and saw what is in high demand there. No one was selling burgers there. Most of the stalls were of parathas and chaat, instead of doing what everyone else was doing, I took a slightly different route. I set up Mexican and American fast food stalls. This food was new to this market and was not easily available.”

He adds, “For three months after setting up the stall, I did not get any profit and there was no hope that the business would grow.”

He says, “Thankfully I didn’t invest much in this business of mine. That’s why I kept my spirits up. It would have cost me a lot to rent a shop. But used an old car for our stalls and commuting, which saved us a lot of money.”

To get the car ready for its business, all the seats except one driving seat were removed. He told, “I had spent around Rs 18,000 to make this car new i.e. to mold it in the moving kitchen. Today it takes 5 minutes to prepare it for the stall in the morning and it doesn’t take more than 5 to 10 minutes to put it up in the evening too.”

Parthiv sells Mexican Burrito, Tacos, Tortilla, Sandwiches and Burgers in his Maruti-800 near the campus (old gate) of IIT, Ahmedabad from 9 am to 10 pm. The cost of a veg burger at their stall is Rs 60, while a jumbo burger will cost Rs 250.

Initially there was no sale

He says, “Earlier, whatever cheese, butter and bun I used to buy, I had to take it back home. Because initially there was not much sales. Earning was far away, even the cost was not being met. I kept investing my savings money in it. I thought that somehow it would work out.”

He adds, “I used to open the shop every day hoping that things would change soon and my faith worked. Slowly people started coming to the stall. The taste of American and Mexican food was being liked by everyone and the crowd kept increasing at my stall.”

Parthiv credits his success to social media. He says that many of his customers made videos of the stalls and uploaded them on different pages. Due to this people started recognizing me. Today many customers come to me, take their order and talk to me. He wants to know more about me. What is the reason behind what I am doing? Why did I have to set up a stall, why did I come back from America? and many more.”

He sells around 100 burger buns in a day. He says, “I do not intend to go beyond 100. I am so happy with the sale. My aim is to make each burger taste equally great and delicious. I can’t compromise on quality.” Parthiv makes all the preparations for setting up the stall at night. If anything is left, get up at 7:30 in the morning for it and deal with it.

According to him, his car full of taste is ready by 9 am outside the IIM gate to take orders. He said, “I have now also hired a person with me, so that I can handle the bank and household chores. After completing all my work, I come back to the stall by 2 pm and then we both stay here till 10 pm.”

When asked what kind of change does he see in India today? He immediately replied, “Young generation talks very well and they also respect my work. He has encouraged me and helped me grow the business.”

Today Parthiv is earning a lot of money from his food stall and his life is living comfortably. Ending his conversation, he says, “It was a pleasant feeling for me to reinvent myself and find a way to stay alive. However, I cannot compare it with my life in the UK and US. But I am happy with whatever I am doing and the amount I am earning every day.”