Throwing news is spreading on social media regarding Corona, be careful 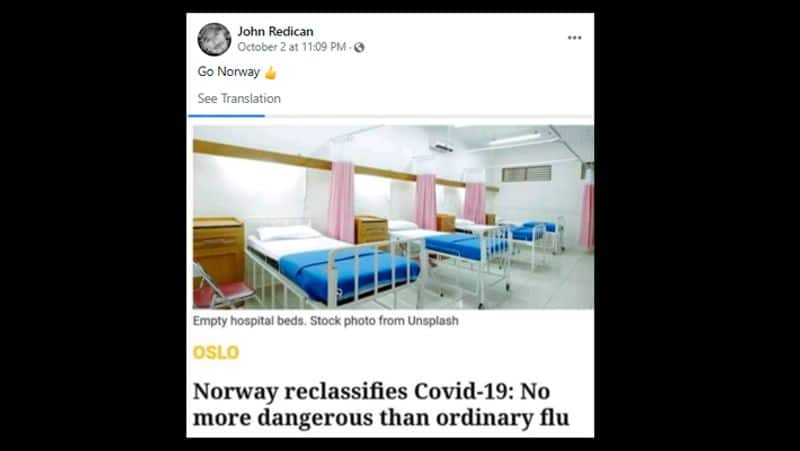 In the last two years, as our normal life has changed completely due to Corona, now we look for masks, hand sanitizers before going out. Taking vaccine to prevent corona, reducing going to crowded places. They stand at a distance of about six yards from each other. This corona pandemic has completely changed us, now we worry about health hygiene. This deadly epidemic is not even completely gone and people have taken it as a joke. This epidemic has taken the lives of lakhs of people so far, we should be vigilant against it, not make fun of it.

We all know very well that not every news received on social media is true, most of the news on social media are thrown away which we should not trust. Similarly, a throwback news and message about Corona is going viral on social media these days. A news clip has surfaced in the past, according to which Norway has once again classified Covid-19. In this clip it is said that corona is less dangerous than a common flu, it is not fatal. Millions of people have watched this clip so far and it is spreading very fast, you have to be safe from it and do not trust any such news.

Also read- The uproar in UP’s Lakhimpur Kheri intensified the political stir, Priyanka Gandhi Vadra was arrested by the police

People who have seen this clip are commenting differently on it, this clip can put a lot of danger to those people. Those who after seeing this will start taking the corona epidemic lightly, while still this epidemic has not been completely averted. There is still hope that its third wave may also come, so we need to be very careful. In such a situation, people need to know what is the real truth of this clip.

In this clip spreading on social media, it has been told that the corona epidemic in Norway has been re-classified. According to this clip, corona is less dangerous than a common flu, on which many people have made their reactions as a thumbsup sign, while many people are commenting “Go Norway”. On examining this entire news clip to the root, it has come to the fore that the corona cases have decreased in Norway as compared to India, so the Norwegian government has removed all the restrictions on the general public, people are now slowly taking their own steps. Returning to normal life. Norway has lifted the restrictions but has not reclassified Corona.

Norway has also not issued any statement in which it has been said to re-classify Corona.
The Norwegian government has not even said that corona is less dangerous than the common flu, so a question arises as to what is the truth of this clip after all. To find out, we put some keywords related to Norway and Corona on Google, after which a report of 23 September came to us. Which was put on free waste media, it was the same report which is going viral on social media these days.

In the article, a senior NIPH official has said that we are in a new stage of corona, where we should see the corona epidemic as one of the many respiratory diseases with seasonal changes. During this search, we found an article of a famous news paper of America, in which this entire viral clip was told to be true. According to this article, it is fake that the Norwegian Institute of Public Health has claimed that Covid is no more dangerous than the common flu. In the end, this entire investigation concluded that the Norwegian government has lifted the restrictions but has not re-classified the corona. Nor has he said that corona is less dangerous than a common flu.