These Bollywood stars looked like this during the first film, now the look has changed a lot, see photos 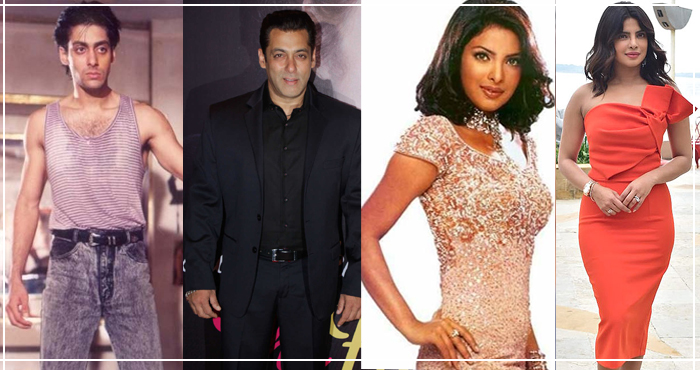 Bollywood industry is such a place where it becomes very difficult to get success. Bollywood stars work very hard to get success in this industry. Some people take many years to achieve success. At the same time, there are some people who are not able to establish themselves in the film industry. As we all know, everything changes with time. Today we will tell you about those famous actors who struggled in their initial days and are ruling Bollywood today. These stars used to look different during their first film and now their look has changed a lot. You will not be able to believe seeing the old pictures of these stars.

Famous actor Salman Khan, who is called Dabangg of Bollywood industry, is included in the list of top actors of Bollywood industry. At present everyone knows them very well. He doesn’t need anyone’s introduction. Salman Khan made his debut in the film industry as a lead actor with the film “Maine Pyar Kiya”. The audience liked this film very much. If we talk about Salman Khan’s look, earlier Salman Khan used to be very thin, but today everyone is crazy about his strong body.

Bollywood’s famous actor Akshay Kumar is a well-known name in the film industry. He made his debut in Bollywood in the 90s. Akshay Kumar started his film career with the 1991 film “Saugandh”. When he entered the industry, he used to look very thin, but now Akshay Kumar is no less than anyone in terms of looks and fitness.

Who does not know the famous Bollywood actor Shahrukh Khan. Today they rule the film industry. People fondly call him by names like Badshah of Bollywood, King of Bollywood, King Khan etc. He has given many superhit films in Bollywood and he knows how to play every character very well. Whether it is a romance film or a comedy film or an action, drama film. He fits perfectly in every kind of character. Let us tell you that Shah Rukh Khan started his career with television. Shahrukh Khan got the opportunity to work in films after Doordarshan’s Fauji serial. He started his film career with the film “Deewana”. Actors Rishi Kapoor and Divya Bharti were seen in the lead roles in this film with him. Shahrukh’s look has changed a lot after years.

Bollywood industry’s famous actor Ajay Devgan started his film career with the film “Phool Aur Kaante”. Ajay Devgan has changed a lot since then. Along with her looks, she has also gained a lot of popularity because of her body.

Bollywood’s famous actress Kareena Kapoor started her film career with the film “Refugee” in the year 2000. There has been a lot of change in the look of Kareena Kapoor before and now. Now it looks very beautiful. At one point, Kareena Kapoor surprised everyone with her zero size figure.

Priyanka Chopra, who has proved her acting skills from Bollywood industry to Hollywood, has worked hard to achieve this position in the film industry. Let us tell you that after winning the title of Miss World in the year 2000, Priyanka Chopra started her film career with the film “Hero” in the year 2003. Sunny Deol and Preity Zinta have also acted in this film. Priyanka Chopra used to look different in the initial days but now her look has changed a lot. Now it looks very beautiful and attractive. Millions of people are crazy about their beauty.

Today the Green Comet will come near the earth, the distance will be only 41 km, how to see this rare sight after 50 thousand years