Why Pathaan Bumper Hit: Pathan has become a bumper hit due to these 10 reasons, why Shahrukh’s film is intoxicated on the audience 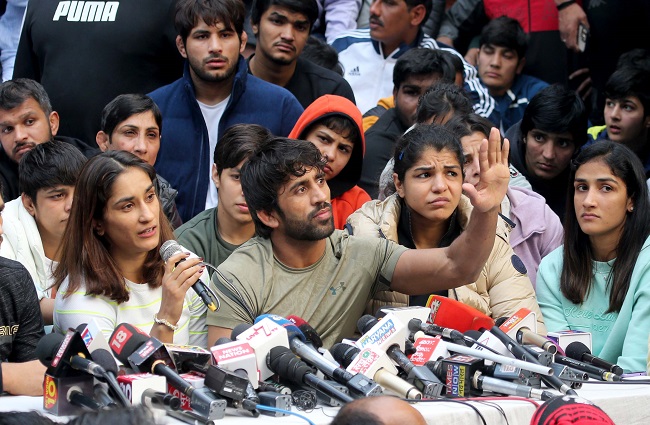 The protest will continue till the demands are met

New Delhi (Hindustan Times). Wrestling players’ protest against the President of the Wrestling Federation of India continued for the second consecutive day. The protesting wrestlers have accused Wrestling Federation President Brij Bhushan Sharan Singh of sexual harassment of women players. The players have demanded the removal of the president of the wrestling federation. Meanwhile, late Thursday night, the protesting wrestlers met Sports Minister Anurag Thakur at his residence in Delhi and discussed their grievances.

At the same time, if sources are to be believed, Brij Bhushan Singh has been asked by the Sports Ministry to resign from the post of the federation’s president in 24 hours, but Brij Bhushan has refused to do so.

In fact, this whole matter got heated up on January 18 when the President of Wrestling Federation of India Brij Bhushan Sharan Singh was accused of sexually harassing and harassing women players. On this allegation, the country’s veteran wrestlers started a sit-in at Delhi’s Jantar Mantar, which continued for the second day on Thursday. There is a clear demand of the players that the present president should be removed from the post and only a player should be made the president of the federation. At the same time, questions have also been raised on the functioning of the federation.

Wrestlers say that till the culprits are punished, they will sit on dharna and no athlete will participate in any event.

If sources are to be believed, Brij Bhushan Singh has been asked by the Sports Ministry to resign from the post of the federation’s president within 24 hours. Along with this, it has also been said that if he himself does not resign from the post, then he will be removed. While Brij Bhushan Singh has rejected outright the talk of resigning at the moment.

The protest will continue till the demands are met

Earlier, officials of Sports Ministry had a meeting with Bajrang Punia, Vinesh Phogat, Sakshi Malik. In this, the officials have assured the players regarding the solution of the problem, but after the meeting, Punia has made it clear in a press conference that until the President Brij Bhushan Sharan Singh is removed from the post and the federation is dissolved, the strike will continue. Will continue like this. Tomorrow (Thursday) morning again the players will sit on strike from 10 am. He also clearly said that only assurances were received in the meeting held with the officials, which is not enough.

Demand to make president from among the players

In the press conference, star female wrestler Vinesh Phogat while making serious allegations of sexual exploitation against Brij Bhushan Singh said that now we not only have strong evidence against him, but also five to six girls. who have complained of abuse. Since the protest started yesterday, I have been continuously getting calls from women players from across the country saying that you have done a great job. Raised our voice We will continue to sit on dharna until our demands are met.

Phogat said that our appeal is to the Prime Minister, the Home Minister and the Supreme Court that a judicial inquiry should be conducted after taking cognizance of the entire matter. Along with this, till the investigation is done, the federation should also be dissolved and its president should also be removed. We also have a demand that the next President of the Federation should be made a player from among us who can understand the problems of the players.

Why Pathaan Bumper Hit: Pathan has become a bumper hit due to these 10 reasons, why Shahrukh’s film is intoxicated on the audience