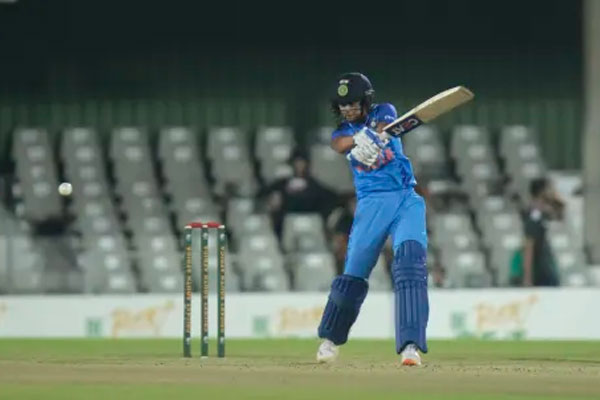 Dubai . India captain Harmanpreet Kaur jumped three places to 11th position in the ICC Women’s T20 International rankings released on Tuesday after winning her first two matches of the ongoing tri-series in South Africa. While Harmanpreet’s 35-ball 56 not out against the West Indies has taken her around the top 10 in the world, all-rounder Deepti Sharma’s 33 in the previous win against South Africa has lifted her to a career-best 25th gave.

Deepti has also gained one place to become second among all-rounders in the latest weekly update.

India opener Smriti Mandhana remains at the third position as her country’s top-ranked batsman, having gained nine rating points to reach 736 points. Mandhana was second in September last year and is now 24 points behind Beth Mooney in the Tahlia McGrath-led list with 814 points.

South African captain Sune Luus has moved from 47th to 45th place with scores of 29 and 30 in the two matches. Chloe Tryon and Marijan Kapp have also made gains.

In the T20I bowling rankings, South African spinner Nonkululeko Mlaba has moved up four places to a career-best fourth position after taking three wickets in two matches. India’s Sneh Rana is in the top 10 while Ayabonga Khaka (up four places to 16th), Rajeshwari Gaikwad (up 10 places to 18th) and Radha Yadav (up 12 places to 28th) are the other gainers.

Mooney was named Player of the Series after scores of 57 and 133 not out in the second and third matches, while Lanning scored 67 and 72, batting twice.

In the bowling rankings, Australia spinner Ashleigh Gardner has moved up seven places to 13th after taking five wickets in the series and Ellyse Perry has gained one place to reach 12th. Alana King (up eight places to 32nd) and Darcy Brown (up two places to 40th) have also gained.

7 home remedies to get rid of moles forever