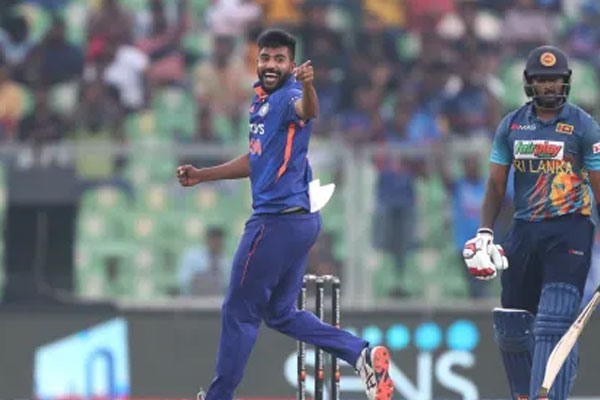 New Delhi . In India’s 3-0 series win over Sri Lanka, Mohammed Siraj showed he is ready to take on the responsibility of delivering early success in ODIs. In the first ODI in Guwahati, he picked up two wickets with the new ball, while taking one wicket in Kolkata. His four wicket haul with the new ball in the third ODI at Thiruvananthapuram was instrumental in helping India to a record 317-run victory.

Siraj took nine wickets in the series at an economy of 4.05, the most by a bowler. Last season of IPL was Siraj’s worst season. With the inswing missing and the outswing only in his hands, Siraj wobbled on the seam delivery, which is now his latest tool of success.

He said in the press conference after the end of the match, with the wobble seam, the batsman can guess how far the ball will go back.

In Thiruvananthapuram, Siraj dismissed Kusal Mendis on a seam ball that held his line and forced the batsman past the keeper. He also credited Dale Steyn for helping him get the wobble-seam delivery.

Siraj further said, I used to get inswing, but I lost it. So I developed the outswing and worked on the wobble seam delivery. It took me a long time to work on this. I practiced a lot in the nets and during IPL I got the confidence that I can bowl. I also spoke to Dale Steyn during the IPL when I was not getting a good outswing, so even then Seam helped me.

He further said, when I did not have a good IPL, I thought that I should work on my white-ball skills as well. So I did that and when I played some good matches, I gained confidence. Now I have stopped thinking about performance, which I did earlier and it has helped me. My focus is on executing every ball.

Asked how he executes the wobble-seam, Siraj explained, “The way I hold the ball, it naturally outswings. When I bowl scrambled seam, I tilt it slightly towards fine leg. I don’t bowl. It’s a weird delivery when I bowl a wobbly ball. It helps me a lot when I hit the deck hard.

The next ODI for Siraj is against New Zealand, starting at the Rajiv Gandhi International Stadium in Hyderabad, which he calls home.

During this series, my plan was to swing the new ball and take the early wickets of the opposition. It doesn’t matter if I hit two-three fours because when it comes to taking wickets, more runs can go in an over.

Rumors are now spreading in poor Pakistan, petrol pumps were empty due to a false news, people stocked