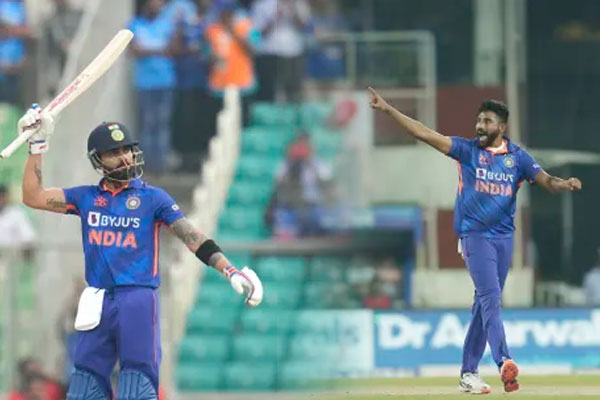 Thiruvananthapuram. Virat Kohli (166 not out), Shubman Gill (116) and Mohammad Siraj (4/32) rode on brilliant performances as India thrashed Sri Lanka by 317 runs in the third and final match at the Greenfield International Stadium here on Sunday to take a 3-0 lead. Took the series to his name. In response to the Indian team’s 390 runs, the entire Sri Lankan team got stacked for 73 runs in 22 overs. Nuwanidu Fernando (19) and Kasun Rajitha (13) scored the most runs from their side. On a slow pitch, Kohli remained unbeaten on 166 off 110 balls, his tenth century against Sri Lanka. In his third hundred in the last four ODI innings, Kohli attacked a hapless bowling attack, hitting 13 fours and eight sixes.

In the last ten overs, he scored 84 out of the 116 runs scored by India to take Sri Lanka very far from the match. He also shared a 131-run partnership with Gill, who was dismissed for 116 off 97 balls, hitting 14 fours and two sixes to take India to a mammoth 390/5.

In response, Sri Lanka collapsed like a house of cards. She went all out for just 73 runs in 22 overs. He had the fourth lowest score in the format and got India the biggest win in ODI history.

Mohammad Siraj broke the back of the visiting team with his deadly bowling. He took career-best figures of 4/32 from ten overs, while Mohammed Shami and Kuldeep Yadav took 2/20 and 2/16 respectively in India’s big win.

Chasing the target, the Sri Lankan team was decimated by the Indian bowlers as half the team returned to the pavilion for 39 runs in the powerplay. Meanwhile, Avishka Fernando (1), Kusal Mendis (4), Charit Aslanka (1), Nuwanidu Fernando (19) and Wanindu Hasaranga (1) were dismissed early. The visiting team kept losing their wickets in the middle overs as well.

Siraj, who came to bowl the 12th over, ran out Chamika Karunaratne (1). After this, Kuldeep made captain Dasun Shanaka (11) his victim. Sri Lanka had lost their seven wickets for 50 runs in 15 overs. Shami got his second wicket by dismissing Dunith Welles (3).

In 22 overs, Kuldeep bowled Lahiru Kumara (9) to give Sri Lanka their ninth blow for 73 runs, due to which India won the match by 317 runs. Rajitha remained unbeaten after scoring 13 runs. At the same time, Ashen Bandara could not come to bat due to injury. With this victory, the Indian team made a 3-0 clean sweep in the series.