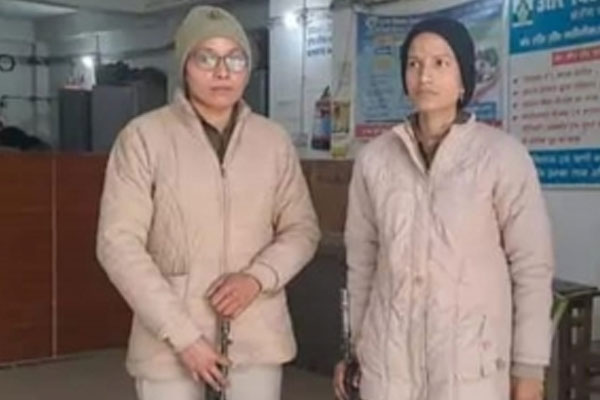 Hajipur. In Bihar, where one hears the news of loot and murder everyday, on the other hand, the news of police’s bravery and peace has also come to the fore from Vaishali district. Here two brave women constables (soldiers) saved a bank from being robbed by setting an example of their courage and dutifulness. The Superintendent of Police of Vaishali has now announced to reward the bravery of these two women constables.

According to the police, women constables Shanti Kumari and Juhi Kumari were on duty on Wednesday at North Bihar Gramin Bank located at Senduari Chowk in Sadar police station area. All the work was going on in the bank. Meanwhile, four miscreants reached outside the bank riding on four bikes. Two of these miscreants wearing masks started going inside the bank.

On this, the soldiers posted in the security asked to remove the mask and show the passbook. On this demand of the soldiers, the miscreants got enraged and took out their pistols and pointed at them.

The female constable also clashed with them showing their bravery. The miscreants also tried to snatch weapons from these constables, in which the women constables also suffered minor injuries.

As soon as the information about the incident was received, the Superintendent of Police of Vaishali reached the spot. He said that on the basis of CCTV footage, the police is trying to identify the miscreants and arrest them. He said that brave women soldiers would be rewarded.

Pakistan Economy Crisis: Pakistan has that treasure which will remove its poverty in one stroke, will earn 100 billion dollars every year