Sunrisers beat Bangalore in such a way, broken RCB’s dream of finishing in top two 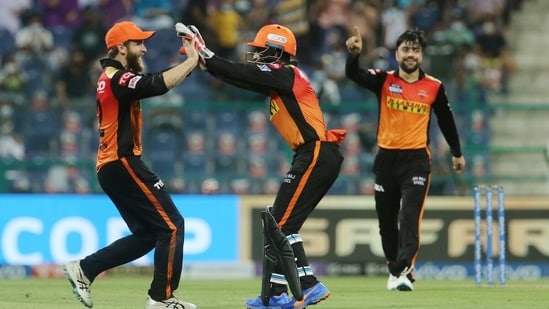 On Wednesday, the 52nd match of IPL 2021 was played between Royal Challengers Bangalore and Sunrisers Hyderabad in Abu Dhabi. In which RCB were defeated by Sunrisers, the dream of RCB which was playing for the second place was shattered by Williamson’s Sunrisers. Captain Virat Kohli decided to bowl first before winning the toss. Batting first, Hyderabad scored just 141 runs for the loss of 7 wickets in 20 overs, by this time RCB seemed to have the upper hand, but what happened in the second innings, RCB may not believe. In reply, RCB could only score 137 runs in 20 overs for the loss of 6 wickets and they had to face defeat by just four runs.

In the second innings, captain Virat Kohli and Devdutt Paddikal came as openers for Bangalore, captain Virat Kohli scoring just 5 runs in 4 balls, which included a four, fell victim to fast bowler Bhuvneshwar Kumar. Devdutt Paddikal handled the innings but during this his strike rate continued to fall, which eventually became the main reason for RCB’s defeat. Padikar scored just 41 runs in 52 balls, which is a very slow innings from the tone of T20. In the middle order, S Bharat also got out after scoring just 12 runs.

After this, once again the responsibility of saving the match fell on the head of Maxwell and de Villiers and both played this responsibility well and Maxwell played a fast innings and confused the Hyderabad bowlers, Maxwell made 3 in just 25 balls. He was playing very well, scoring 40 runs with the help of fours and 2 sixes, when Williamson ran him out, due to which the whole course of the match changed. In the last over, de Villiers was present on the critch for Bangalore, 13 runs were required for victory but Bhuvneshwar bowled very well due to which de Villiers could not succeed in scoring just 13 runs in the last over, de Villiers scored 19 runs in 13 balls. remained unbeaten.