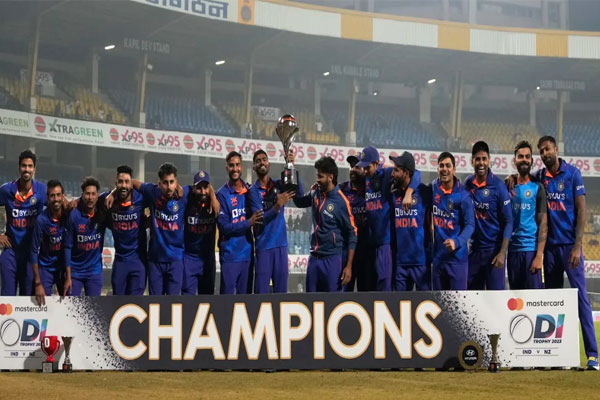 Indore. The Indian cricket team on Tuesday climbed to the top of the ICC Men’s ODI Team Rankings after a 3-0 clean sweep over New Zealand. Brilliant centuries from Shubman Gill (112 off 78) and Rohit Sharma (101 off 85), followed by impressive outings from bowlers Shardul Thakur (3-45) and Kuldeep Yadav (3-62) helped India win at the Holkar Cricket Stadium. 90-run victory in the third and final ODI despite a struggling century from Devon Conway.

India won the first ODI in Hyderabad by 12 runs, a high-scoring match, while the Indian fast bowlers took the second match to an eight-wicket win in Raipur and, with a third win in Indore Has now reached the pinnacle of the men’s ODI rankings.

England, who had regained the top spot three days earlier following New Zealand’s loss to India in the second ODI, are now second, with New Zealand slipping to fourth. Before the match played on Tuesday, all three were tied on 113 points. But if we talk about the new figures, India is now in the first place with 114 rating points, the England team which was in the first place with 113 points has reached the second number. Australia is at number three with 112 points. At the same time, New Zealand has slipped to the fourth position. New Zealand has 111 rating points.

If England manages to win their upcoming ODI series against South Africa 3-0, they will dislodge India from the top of the table in the Men’s ODI rankings and become No.1 in the ODI rankings themselves again.

Oops! Deepika’s so beautiful look on the cover page…