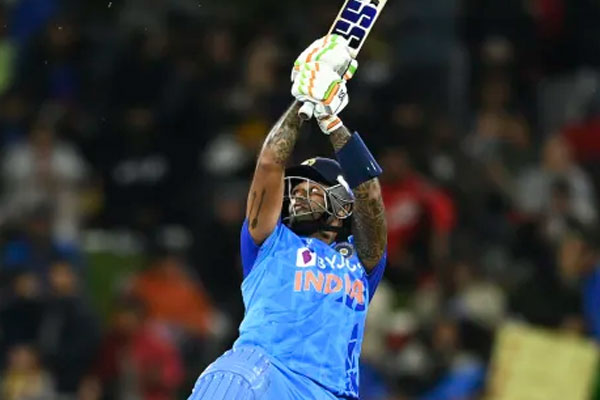 Suryakumar said, Thank you very much, ICC named me ICC T20 Cricketer of the Year. It’s a great feeling because 2022 was amazing for me. From a personal point of view, I enjoyed some of the innings I played in that year.

“If I had to pick one innings, which was very special for me, it was the first century for my country (against England in the 3rd T20I at Nottingham) because the first hundred is always special,” he added. Hopefully, many more innings to come.

Suryakumar had a sensational 2022 in the shortest format, becoming just the second batsman to score over 1000 runs in a year across formats with his 360-degree strokeplay. He ended the year as the highest run-scorer with 1164 runs at an average of 46.56 and a strike rate of 187.43.

The record of 68 sixes in 2022 is the most hit by a player in the shortest format in a year. With two centuries and nine half-centuries in the year, Suryakumar was undoubtedly the number one men’s T20 batsman, having gained a career-high 890 rating points to be the top-ranked T20 batsman in 2022.

Suryakumar scored 239 runs in the Men’s T20 World Cup in Australia at an impressive average of 59.75 and an impressive strike rate of 189.68, including match-tempo-changing half-centuries against South Africa, Zimbabwe and the Netherlands.

In the second T20 against New Zealand at Mount Maunganui, he hit 11 fours and seven sixes all over the park at a strike rate of 217.65, finishing unbeaten on 111 off 51 balls, his second T20 century.

But it was his maiden T20 century against England at Trent Bridge, Nottingham, with 117 off 55 balls, that caught the eye of cricket fans. From 31/3 in a run chase of 216, Suryakumar brought India close to victory with his brilliant stroke-making.

Jadeja’s duplicate was not found… Australian batsman danced at the behest of Jaddu-Ashwin, India danced with joy, gave funny reactions

PMI Electro created history, delivered its 1000th electric bus, this will be a special advantage in the next 12 years