Great match between India and England, Test match in Birmingham from July 1 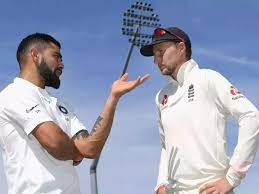 Test match is to be played between India and England in Birmingham from July 1. This is the same test which was postponed last year due to Corona. When the series was halted, India were ahead 2-1.

If Team India wins this match, then for the first time after 2007, the team will win a Test series in England. That is, the team will have a chance to create history after 15 years. However, England has five such players who can break India’s dream.

England’s legendary bowler James Anderson, 39, can prove to be a big threat for Team India. Recently in the series against New Zealand, he has completed 650 wickets in Test cricket.

The record of this player against India has also been excellent. He has played 34 test matches against Team India and has taken 133 wickets. His average during this period has been 25.22.

Anderson becomes very dangerous with the new ball. They are getting better with increasing age. In such a situation, Team India will have to stay away from this player.

This year, this brave player of England is in amazing form in Test matches. From 2019 to 2021, not a single century was scored by Bairstow’s bat. At the same time, this year this player has scored 3 centuries.

In the second test match against New Zealand, England chased the target of 299 runs in 50 overs. In this match, 136 runs came off just 92 balls from Bairstow’s bat. This included 14 fours and 7 sixes.

It was the second fastest century ever scored by England in Test cricket. Gilbert Jessup holds the record for scoring the fastest Test century for England. Jessup scored a century against Australia in 1902 in 76 balls.

Considering the kind of form Bairstow is in, the Indian bowlers should devise a strategy to send this player to the pavilion early. Bairstow has played 17 Test matches against India and scored 803 runs at an average of 27.68.

Last year when Team India went to England tour. Then this England fast bowler had troubled the Indian batsmen a lot. Robinson took 21 wickets in 4 matches. Team India’s batsmen do not understand his swinging ball. When the ball got old, Robinson used to trouble the batsmen with his bounce and pace. In the third test, this player took 7 wickets for 81 runs.

With Ben Stokes becoming the captain, the attitude of the England cricket team has changed. Before Stokes took over as captain, England had suffered a crushing 4-0 defeat against Australia in the Ashes. At the same time, the West Indies team defeated them 1-0 at home, but with Stokes becoming the captain and Brendam McCullum as the coach, the English team has returned to the old colors.

Along with a brilliant captain, Stokes is also the best all-rounder in the world. Whether it is bowling or batting, they can trouble Team India. He was not a part of the team in 4 Test matches last year, but now he can become a big problem for Team India. Stokes has scored 4 fifties and a century against India. At the same time, 34 wickets are also in his name. His best performance is 5 wickets for 73 runs.