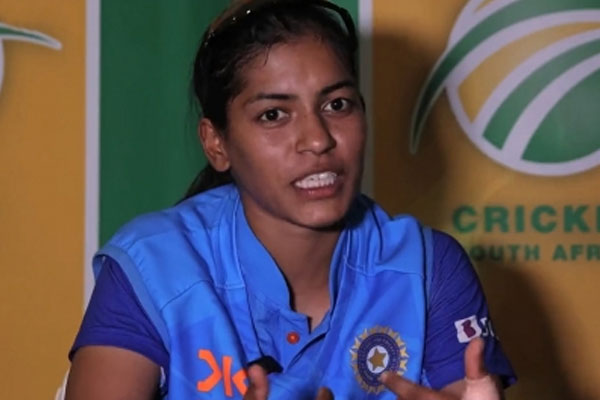 East London, (South Africa). In the 12th over of the match, India lost five wickets on the score of 69. Apart from Yastika Bhatia, the other four batsmen did not even touch double digits. Runs were not easy to come by on a tough pitch and hot conditions. Right then all-rounder Amanjot Kaur, making her T20 International debut, came to the crease to support Deepti Sharma.

Amanjot likes to take up challenges. After starting playing domestic cricket for Punjab in 2018–19, he switched to Chandigarh in search of match opportunities from 2019–20. Along with captaining Chandigarh in these two seasons, he contributed with both bat and ball. Her place in the XI was confirmed and she was spreading her wings.

However, he wanted more from his career. Hence, to play more competitive cricket, he again moved to Punjab in 2022-23 where he got a chance to learn from Indian wicketkeeper Tania Bhatia. In the Senior Women’s T20 Trophy, Amanjot top-scored for Punjab with 192 at a strike rate of over 100. She then took eight wickets for North Zone in the Senior Women’s Inter-Zonal T20 competition.

A young fast bowling all-rounder who has been performing with consistency in Indian cricket, Amanjot was called up to the Indian team for the tri-series ahead of the Women’s T20 World Cup. This was all the more important as India’s premier all-rounder Pooja Vastrakar was on her way back to full fitness after being ruled out of the series against Australia last month.

Now in his very first international match, Amanjot was faced with the challenge of saving India from getting all out on a low score. He took his time to read the conditions and made just seven off the first 13 balls. She missed the advantage of the free hit but remained grounded at the crease. After taking time, now it was time to open your hands.

Ayabonga Khaka, bowling his third over, was greeted with two well-timed cover drives. On both occasions, Khaka bowled full balls to Amanjot in the favored region outside off-stump, inviting him to go for the gap. Amanjot then played a ball over Marijan Kapp’s head and the timing was so good that the ball went across the boundary line. In the 19th over of the innings, he hit Khaka for three more fours.

Overall, Amanjot scored 22 off 10 balls of Khaka and 10 off five balls of Kaap. She remained unbeaten on 41 off 30 balls, the second highest score by an Indian on T20 International debut.

After becoming the third Indian player to win the Player of the Match award on T20 International debut, Amanjot said, playing for Chandigarh was a turning point as I gained knowledge, maturity and limelight as a batsman. Then I went to Punjab and had to take that step because I wanted to play more competitive cricket with seniors. Tania was there and I learned from her what it’s like to be at the highest level and what the competition is like.

Amanjot added 76 runs with Deepti for the sixth wicket, which is the fourth highest partnership in all Women’s T20 Internationals. Thanks to him, India scored 44 runs in the last four overs and the team managed to reach 150. The score went out of South Africa’s reach on a pitch that favored spin.

Amanjot said, Deepti said that I should not try to hit the ball too hard. The talk was try for singles first and once you get set the boundaries will keep coming. He told me to control my excitement as it was my debut and advised me to keep calm and build partnerships so that the team can reach a good position.

Amanjot started training at the age of 17 under the guidance of bowling coach Nagesh Gupta. His father had enrolled his name in the academy. The father felt that his passion for cricket would slowly end. Although she was looking forward to do something big in cricket for India. Seeing his dedication, his father, who was a wood contractor and carpenter, quit his contract job and did carpentry work only at a place near their home so that he could take Amanjot for training.

Amanjot said, “That journey between home and academy was three-and-a-half to four hours and he (father) played a big role in managing that in 2016-17. Earlier he used to take long hours and stay at the client’s place and sometimes away from home. But in order to pick and drop me from the academy, he left that.

Having made a mark in her very first match for the Indian team, Amanjot knows that her journey has only just begun. However, as we mentioned earlier, he likes challenges and is up for it.