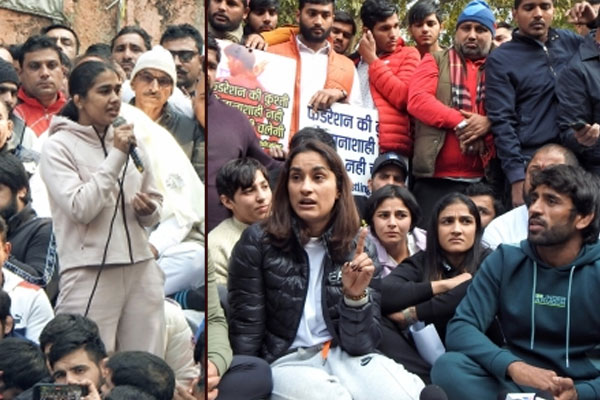 New Delhi . Commonwealth Games medalist Geeta Phogat and her sister Babita have come out in support of their cousin Vinesh and her brother-in-law Bajrang Punia. The two, along with other top Indian wrestlers, are currently protesting against the Wrestling Federation of India (WFI) for harassing women wrestlers. Olympian wrestlers Bajrang Punia, Sakshi Malik, Vinesh Phogat and other top Indian wrestlers protest against Wrestling Federation of India (WFI) President Brij Bhushan Sharan Singh at Jantar Mantar here following serious allegations of sexual harassment of women wrestlers leveled by Vinesh. are doing.

Asian Games and Commonwealth Games gold medalist Vinesh broke down while talking to reporters on Wednesday as Vinesh said she was subjected to mental harassment by Brij Bhushan Sharan Singh. He said that he had even thought about suicide. Over 30 wrestlers, including Olympic medalists Sakshi Malik and Bajrang Punia, protested at Jantar Mantar here.

On Thursday morning, Geeta Phogat and Babita Phogat tweeted their support to the protesting wrestlers demanding the removal of the WFI president.

Geeta wrote in a tweet on Thursday that the wrestlers of our country have done a very courageous job in bringing out the truth of what happens to the players in WFI. It is the duty of all our countrymen to support the sportspersons in the fight for this truth and to give them justice.

Her younger sister Babita also tweeted, “I stand with all my fellow players in this matter of wrestling. Should be decided according to the sentiments of the players.”

Sources told IANS, “All the wrestlers stayed awake till late night. They were discussing the further plan of the movement. They were sharing messages on social media and asking more and more wrestlers and people of India to attend Jantar- Requesting to join on Mantar.”

“Some senior officials of SAI (Sports Authority of India) also met him at the temple. This morning he had prasad and left for Jantar Mantar to continue his protest,” he added.

On Wednesday, the Sports Ministry had sought an explanation from the WFI within the next 72 hours on the allegations leveled by the wrestlers against the federation and its chief.

Rumors are now spreading in poor Pakistan, petrol pumps were empty due to a false news, people stocked