Don’t remember the last time we had a proper meal but this fight is more important: Sakshi Malik 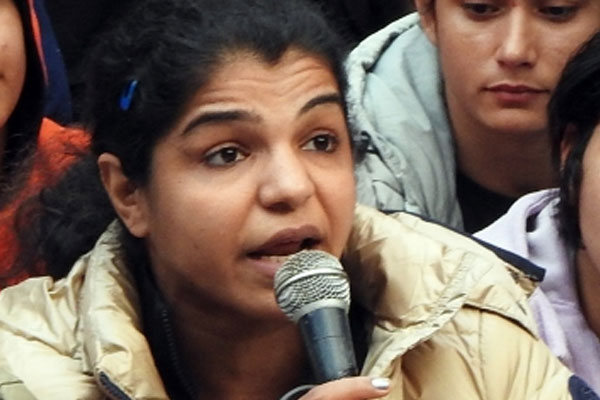 New Delhi . The bugle has sounded, now the time has come to prepare for the great war. Carrying placards, several junior wrestlers – girls and boys – have been protesting at Jantar Mantar here for the past two days in support of their icon. As the day progresses, the crowd of people keeps increasing.

No one knows how long this tussle between the country’s top wrestlers and the WFI will continue, but each passing day is hampering India’s preparations for the upcoming major events – the World Championships and the Asian Games.

According to wrestling pundits, the government should sort out this issue at the earliest before it gets out of hand!

Over 30 wrestlers, including Olympians Vinesh Phogat, Sakshi Malik and Bajrang Punia, are taking to the streets against their federation chief Brij Bhushan Sharan Singh after he publicly accused him of sexual harassment.

They started a protest at New Delhi’s Jantar Mantar on Wednesday, which entered its third day on Friday, and who knows how long it will go on! But according to the wrestlers, they will continue to protest until their demands are met.

Daily talks are going on between the government officials and the wrestlers but no concrete result could be found. The wrestlers had also met Sports Minister Anurag Thakur late on Thursday night, though that meeting also did not yield any results.

IANS spoke to Rio Olympics bronze medalist Sakshi Malik about her next move. Meanwhile, the wrestler from Haryana also shared the basic issues that the protesting wrestlers are facing.

Q: It is an important year for Indian wrestlers as there are qualifiers for the Paris Olympics and then there is the Asian Games. How much is it affecting you mentally and physically as each passing day counts?

Answer: You are already seeing the effects. Today is the third day and how troubled we are mentally or physically. We slept around 4 and then got up early. We don’t have proper sleep or food. I don’t remember the last time we had a proper meal. But this fight is important for wrestling. We request the Prime Minister and the Home Minister to fulfill our demands as soon as possible, so that we can start our training for the upcoming tournaments and win medals for the country.

Q: You are all top wrestlers who have made India proud in many competitions, but now you are forced to come out on the streets and protest for justice. How frustrating it feels as an athlete.

Answer: It is really sad that well-known wrestlers are sitting here on the road, giving up their training and putting their careers at stake. Today is the third day that we are sitting on dharna for a matter which should be resolved through dialogue only once.

Q: You are demanding the sacking of WFI President Brij Bhushan Sharan Singh and dissolution of the federation. What else do you have to say about this?

Q: How is this fight against the federation and its president going to help young women wrestlers in India?

Answer: If we win this fight then not only women but the entire wrestling game is going to be benefited and Indian wrestling will reach new heights. If this fight ends in our favor then the youth will not be cowed down like us.

Question: All of you met Sports Minister Anurag Thakur on Thursday night. how was your meeting? Did he give any assurance?

Answer: We have nothing to say at this time. We will continue the protest today and see if a solution emerges.

Knowing the benefits of rose water, you will be stunned.