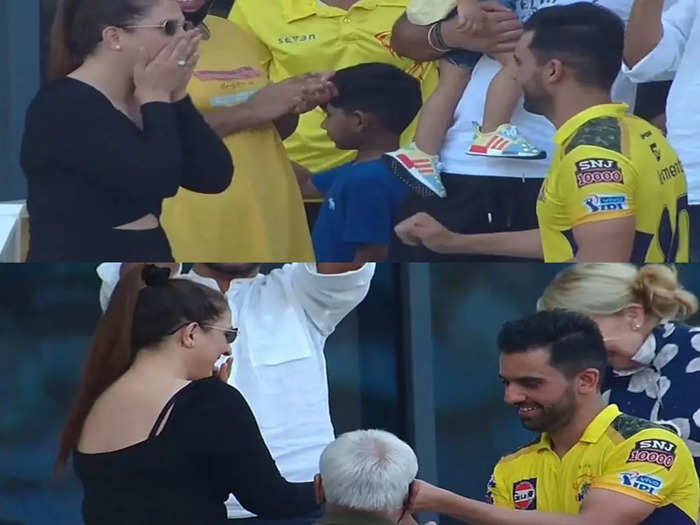 You must have known Indian cricketer Deepak Chahar. Deepak Chahar, who ruled the hearts of millions of youth on the strength of his bowling, did something during the live match which is being discussed loudly. Deepak Chahar got engaged on Thursday at the stadium itself after the match against Punjab Kings. The engagement video of Deepak Chahar and his girlfriend is the most discussed on social media at this time. In such a situation, the question is arising that who is the girlfriend of the last Deepak Chahar, what is her name, when did Deepak Chahar’s love blossom, let us answer all the questions to you.

Who is Deepak’s Humsafar?

In IPL 2021, Chennai Super Kings faced Punjab Kings in the first match of the day on Thursday. Chennai lost in this match, but soon after the match, Deepak Chahar proposed his girlfriend Jaya Bharadwaj in a filmy style, sitting in the audience. Deepak Chahar’s girlfriend’s name is Jaya Bhardwaj. She is the contestant of Bigg Boss 5, Splitsvilla 2 and sister of actor Siddharth Bhardwaj. Talking about Jaya’s career, she hails from Delhi and works in a corporate firm. Today when Deepak proposed her wearing a ring, her happiness knew no bounds and after wearing the ring, she hugged Deepak. The churches of the linkup of both were going on for the past several months. It was being told that both are very serious about their relationship. It was believed that Deepak Chahar and Jaya Bhardwaj could get engaged as soon as they return home after IPL 2021, but both did not consider it appropriate to wait so long. Deepak Chahar openly expressed his love among the fans at the Dubai International Stadium.

In the video you can see that as soon as the match ended, Deepak Chahar went straight to the audience gallery, where his girlfriend Jaya was present. Deepak Chahar expressed his love by sitting on his knee in front of the audience. His girlfriend also immediately gave a green signal to Deepak’s love by saying yes. After this both hugged and changed the ring. During this, the fans were very happy and were applauding. Even though Chennai Super Kings had to face defeat in this match, but in spite of this, as soon as the video of Deepak Chahar’s engagement surfaced, the fans forgot Chennai’s defeat. At this time it is becoming quite viral on social media. There was a lot of curiosity among the fans to get information about Deepak Chahar’s fiancee. This is the reason why he became a trope trend on Twitter within just five minutes after Deepak Chahar changed the ring. Jaya is with Deepak in IPL 2021 and is part of CSK’s bio bubble. She has gone to UAE to encourage Deepak and today she got a surprise which she might not even have expected.

What did the father say, what is the relation with Bollywood?

Deepak Chahar is the brother of Bollywood actress Malti Chahar. Deepak Chahar’s father Lokendra Chahar told that he saw the whole moment on TV. He told that he wanted to propose after the team reached the play-offs. But, at the behest of Chennai captain Mahendra Singh Dhoni, he proposed to his girlfriend in the league match itself. Deepak’s father told that the whole family is happy. Now after the return of Deepak, further talk will be done. The wedding date has not been decided yet. Soon both the families will decide the date of marriage together.