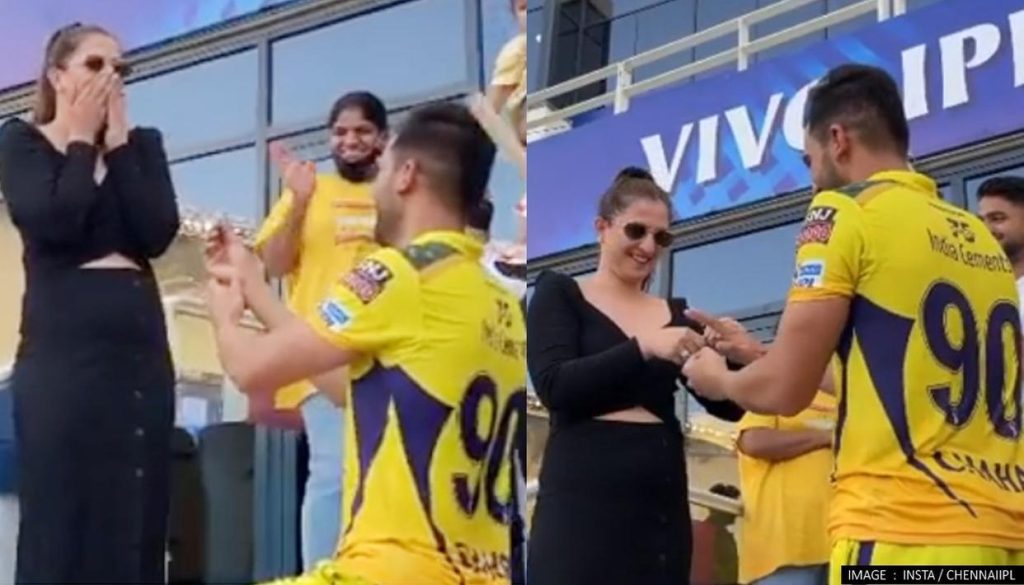 In IPL 2021, Punjab defeated Chennai Super Kings on Thursday. After the match, 29-year-old Chennai Super Kings fast bowler Deepak Chahar proposed Jaya Bhardwaj, sister of Bigg Boss fame Siddharth Bhardwaj. He made Jaya ring in front of everyone in the stands. Deepak and Jaya have been in a relationship for a long time.

Father said – proposed in the league itself at the behest of Dhoni
Deepak Chahar’s father Lokendra Chahar told that he saw the whole moment on TV. He told that he wanted to propose after the team reached the play-offs. But, at the behest of Chennai captain Mahendra Singh Dhoni, he proposed to his girlfriend in the league match itself. Deepak’s father told that the whole family is happy. Now after the return of Deepak, further talk will be done. The wedding date has not been decided yet. Soon both the families will decide the date of marriage together.

Deepak is also related to Bollywood
Deepak Chahar is the brother of Bollywood actress Malti Chahar. Deepak has not been able to show amazing with his bowling in the second leg of the IPL. Deepak was the strongest contender in the ICC T20 World Cup as a fast bowler for the Indian team. But he was not selected in the team. Just a few days ago, on the tour of Sri Lanka, Deepak did an amazing performance with his bat as well.

Best bowling performance for India in T20
This fast bowler of Chennai Super Kings has bowled the best in T20 for India. He took 6 wickets for 7 runs against Bangladesh. This is the best performance by any Indian fast bowler in T20 cricket.

Well-known name of Jaya’s brother Siddharth TV
Let us tell you, Siddharth Bhardwaj, brother of Deepak’s girlfriend Jaya Bhardwaj, is a well-known name in the TV world. He has also appeared in ‘Bigg Boss 5’ as well as ‘Splitsvilla 2’. Deepak Chahar’s cousin Rahul Chahar plays in the IPL for Mumbai Indians. Rahul has been selected for T20 World Cup.