Before the India-Pakistan T20 World Cup match, chance-opportunity ad flashes, memes are being made on social media 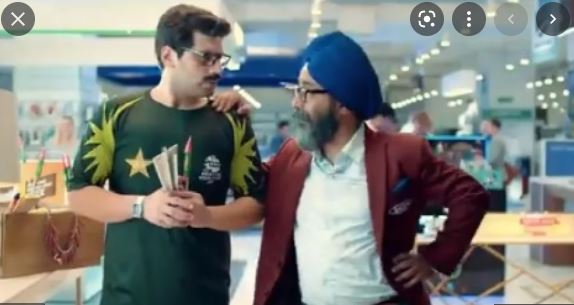 T20 World Cup is about to begin. Cricket match fans are eagerly waiting for the World Cup as there will be a tussle between India and Pakistan on October 24. The seventh edition of the T20 World Cup will be played in the UAE and Oman from 17 October 2021 to 14 November 2021. This year 12 teams will play in the main event. This time the teams are divided into 2 groups. In the first group-1, Australia, current world champion West Indies, South Africa and ODI world champion team England and two qualifier teams have been kept. While Group-2 will have India, Pakistan, New Zealand, Afghanistan and two qualifier teams.

Like every time, this time too a chance ad has been made. The ad was released on Wednesday only. As soon as the ad came on social media, it quickly went viral. With the advent of the ad on social media, there was a flood of memes. This time it has been shown in the ad that a Pakistani fan who is in Dubai and wants to see Pakistan’s victory on a big TV, goes to the TV showroom to buy LCD. Pakistani fan says he wants TV. The shopkeeper says that one with the other TV is free. You take two TVs. One will be useful for viewing and the other will be useful for breaking. After the arrival of the ad, users are giving their feedback on social media. Ad fans are very much liking it.

One user wrote – This time again the TV will break in the homes of Pakistan. Some users wrote that we were waiting for this ad since long. Other users wrote – by one – break one .. free .. Some users said that not this one but 2015’s Chance-Mauca Ad was the best. Please note that the teams are divided into two parts.

When the anchor asked Golden Boy, who is the inspiration for the hairstyle? Shahrukh or Ishant!, know what Neeraj Chopra said

Arvind Trivedi, who played Ravana in Ramanand Sagar’s Ramayana, passed away due to heart attack

Religious riots increased the most in the country during the Corona period, almost doubled in comparison to previous years