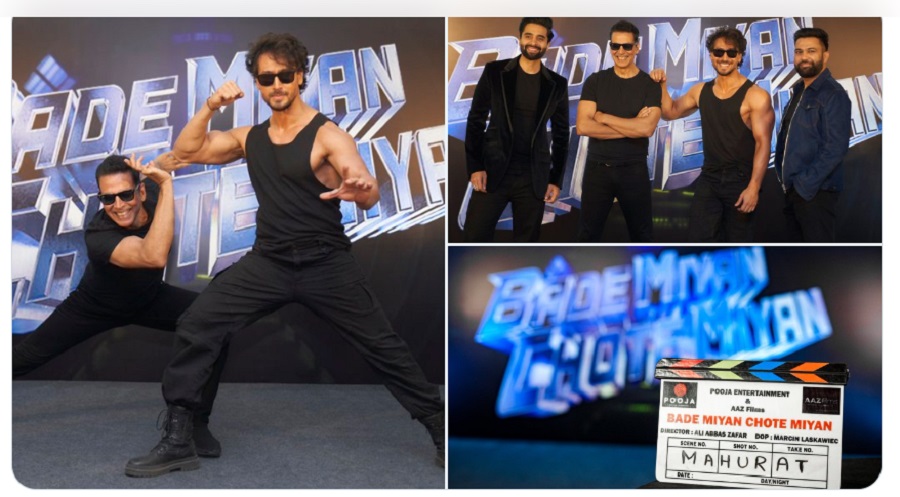 The shooting of Bollywood actor Akshay Kumar and Tiger Shroff’s upcoming film Bade Miyan Chote Miyan has started. Film actor Akshay Kumar himself gave this information. He posted via Twitter that one such film that I have been most eager to start is Bade Miyan Chote Miyan. My little Tiger Shroff has added to my spirits. Then he codes Tiger Shroff and writes in the style of having fun that hey little one, you better remember during the shooting that you were born in the year when I started my career.

Along with this, Akshay Kumar has shared three pictures on his Instagram account. In the first picture, he is seen posing in action style having fun with Tiger Shroff. Tiger Shroff, Jackky Bhagnani and Ali Abbas Zafar are seen with him in the second picture. In the third picture, the clapboard of the movie ‘Bade Miyan Chote Miyan’ is visible and the Muhurta is written on it.

The film Bade Miyan Chote Miyan will be released on the occasion of Christmas 2023 in five languages ​​apart from Hindi especially Kannada, Tamil, Telugu and Malayalam. The film is being produced under the banner of Pooja Entertainment, which is an action-thriller film. It stars Tiger Shroff in the lead role alongside Akshay. Along with this, Malayalam superstar Prithviraj Sukumaran is also playing an important role in the film. The film is directed by Ali Abbas Zafar.